TEHRAN, February 8 - Leader of the Islamic Revolution Ayatollah Seyyed Ali Khamenei has warned that enemies are resorting to any means at their disposal, including cyberspace and sanctions, to undermine the Iranian nation’s faith in the 1979 Islamic Revolution. 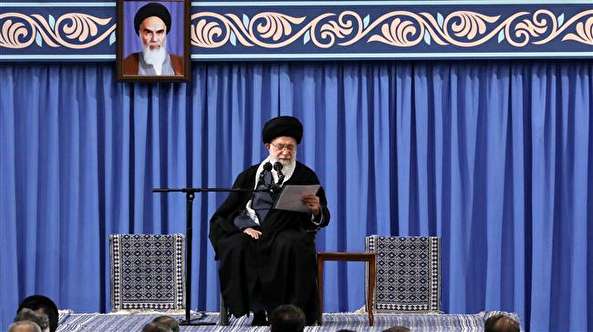 TEHRAN, Young Journalists Club (YJC) - Ayatollah Khamenei made the comments in a meeting on Thursday with the commanders and personnel of Iran’s Air Force and the country’s Khatam al-Anbia Air Defense Base.

The enemy is bent on “preventing the Revolution’s continuation and perseverance; it uses any means at its disposal” to achieve that goal, said the Leader.

Ayatollah Khamenei noted that apart from the cyberspace, the enemy resorts to sanctions to have impact on the Iranian people’s lives, but they have so far failed to weaken their faith in the Revolution as the nation has remained vigilant in the face of such schemes.

Despite all the enmities, the Islamic Revolution is “alive and growing,” Ayatollah Khamenei stressed.

The Leader drew attention to the upcoming nationwide rallies marking the 39th anniversary of the Revolution, saying there will be a stronger turnout this year against the backdrop of recent hostile positions of US officials against the Islamic Republic.

“Given the nonsense statements by some US officials, the [Iranian] people feel that the enemy is waiting in ambush for aggression and hostility,” Ayatollah Khamenei said. “This year, the participation of people will be more vigorous than ever and everyone will take part, God willing.”

Ayatollah Khamenei further called on the country’s officials to step up their efforts to uproot corruption and discrimination and work to improve people’s lives.

The Islamic Revolution is a “popular” one; therefore, people must be given priority on any agenda, the Leader emphasized.