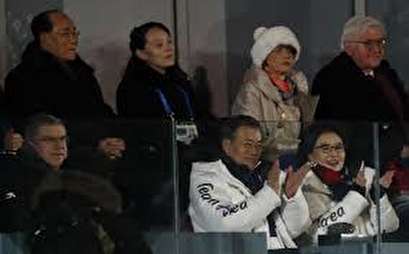 “It was a very emotional moment to get finally there after many years of hard work and many negotiations still taking place here,” the German said the morning after the opening ceremony of the Pyeongchang Winter Games.

“Then to see it finally happen, it really did not only give me goosebumps but I think the whole public and I guess the entire world.”

The sight of North and South Koreans marching together for the first time in a decade was the culmination of months of work by Seoul. The South Koreans want to use the Olympics to ease tensions spurred by North Korea’s pursuit of nuclear weapons.

The spectacle was greeted with apparent joy by South Korean President Moon Jae-in and his guest, Kim Yo Jong, sister of North Korean leader Kim Jong Un. They stood from their seats and, smiling, shook each other by the hand.

Not everybody was so taken by the show of Korean unity, with U.S. Vice President Mike Pence remaining seated as the North and South Koreans entered the stadium.

“I didn’t see it there. I was standing and I think the whole team felt very much welcome and this welcome does not depend on who stands and who does not stand,” Bach said.