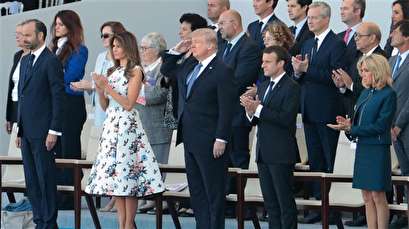 Using Trump’s favorite social media forum, O’Neill -- who also serves “contributor” for right-wing Fox News – tweeted that the idea suggested by Trump, whose presidential campaign he had supported, is not something the US should consider.

"A military parade is third world bulls**t," O'Neill said on Friday, adding: "We prepare. We deter. We fight. Stop this conversation."

In response to a user’s reminder that France and Russia conduct military parades as well, O’Neill replied: "Yes. Third World. If Russia or France were powerful enough to take over the world, they would. We are yet we don’t. That’s called First World."

The US president reportedly stated last month that he was inspired to stage a military parade in Washington on July 4, after watching France’s Bastille Day military parade last July.

Trump’s call for a military parade has also triggered fierce condemnation by a number of US lawmakers. Democratic Congresswoman Jackie Speier of California said during a CNN interview on Tuesday that she was "stunned by it," and that "we have a Napoleon in the making here."

Another California lawmaker, Congressman Ted Lieu, also mocked Trump’s idea and said, "Basically anything," would be more useful than asking the Pentagon to waste money on a big military parade.

White House Press Secretary Sarah Huckabee Sanders said during her press briefing on Wednesday that "President Trump is incredibly supportive of America's great service members, who risk their lives every day to keep our country safe."

"He has asked the Department of Defense to explore a celebration, at which all Americans can show their appreciation," Huckabee added.

However, she also noted that "nothing has been decided," and that the White House hasn’t made a final decision about holding a military parade.

Citing two unnamed officials briefed on the planning, the daily added, “The marching orders were: I want a parade like the one in France. This is being worked at the highest levels of the military.”

It came after Trump had witnessed a French military parade when he was French President Emmanuel Macron's guest on Bastille Day last year.