Lebanese army will use all means to counter any Israeli aggression: Army chief

TEHRAN, February 20-Lebanon’s army has warned Israel against staging a new war on the country, vowing that it will use every available means to deter such an act of aggression. 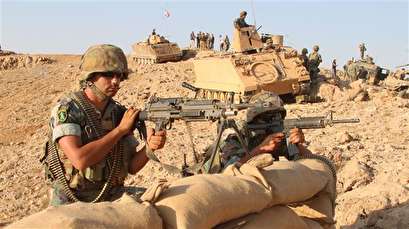 TEHRAN,Young Journalists Club (YJC) -Lebanon’s army has warned Israel against staging a new war on the country, vowing that it will use every available means to deter such an act of aggression.

“I affirm again our categorical rejection of the Israeli enemy infringing on Lebanon’s sovereignty and its sacred right to exploit all its economic resources,” Lebanese army chief General Joseph Aoun said on Twitter on Tuesday.

“The army will not spare any method available to confront any Israeli aggression, whatever that costs,” he wrote.

Earlier this month, Lebanese President Michel Aoun said he had ordered the country’s armed forces to confront any attempt by Israel to undermine Lebanon’s sovereignty.

The two sides have nearly come to blows over a tender by Lebanon in December for oil and gas exploration projects in two of the country’s 10 offshore blocks in the Mediterranean Sea, namely Block 4 and Block 9.

The move angered Israel which claims sovereignty over the ninth block.

The Tel Aviv regime has also escalated the tensions by announcing plans for a wall to isolate the occupied Palestinian lands from Lebanese territories.

Lebanon has objected to Israel’s plan, saying the wall violates its sovereignty by passing through territory that belongs to the country but is located on the other side of a UN-designated Blue Line, which sets the limits for Israel’s 2000 withdrawal from southern Lebanon.

Tel Aviv says the construction will go ahead as planned.

The Israeli regime has waged three wars on Lebanon — in 1982, 2000, and 2006. It has also carried out assassinations in Lebanese territory.

Since its establishment in 1985, the Hezbollah resistance group has helped the army defend Lebanon against Israel’s 2000 and 2006 wars.

The resistance movement warned Israel against the “grave consequences” of the regime’s next war, vowing to defend the rights of Lebanon in oil and gas exploration in the eastern Mediterranean region against any new Israeli aggression.