Terrorists' Base in Eastern Damascus Destroyed

TEHRAN, February 20-The Syrian army's air and ground units smashed the military base and arm caches of the terrorists in the Eastern Ghouta of Damascus on Tuesday, as government forces are preparing for extensive operations in the region. 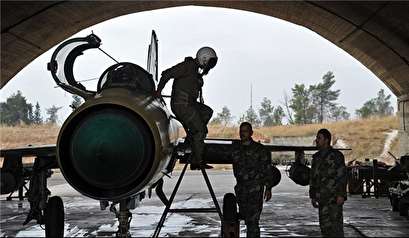 TEHRAN,Young Journalists Club (YJC) -The Syrian army's air and ground units smashed the military base and arm caches of the terrorists in the Eastern Ghouta of Damascus on Tuesday, as government forces are preparing for extensive operations in the region.

Meantime, during the operations, several positions of the terrorists, including one of their training bases and a number of arms and ammunition caches in the farms between Harasta and Duma were destroyed.

The sources also confirmed that the Syrian army has sent more forces and equipment from Central Syria towards Eastern Ghouta in Damascus, adding that there is an imminent possibility for the army's extensive operations in the region.

Local sources had reported on Monday that the Syrian army sent fresh forces and more military equipment to the Yarmouk Palestinian Refugee Camp in the Southern countryside of Damascus province amid intensified infighting between terrorist groups in the camp.

The sources said that hundreds of fresh forces and a large volume of equipment and several military vehicles have been forwarded by the army to the Yarmouk camp.

They further said that the army's fresh forces will possibly take part in an imminent anti-terrorism operation in Yarmouk camp after fierce clashes erupted again between ISIL and the Al-Nusra Front (Tahrir al-Sham Hay'at or the Levant Liberation Board) terrorists in recent days.