TEHRAN, March 10- The first group of militants have surrendered their arms and left East Ghouta as an increasing number of rebel fighters in Syria seek to disassociate themselves from Jabhat al-Nusra terrorists, the Russian military has announced. 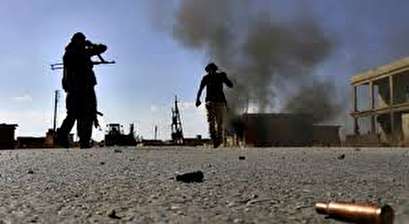 TEHRAN,Young Journalists Club (YJC) - The first group of militants have surrendered their arms and left East Ghouta as an increasing number of rebel fighters in Syria seek to disassociate themselves from Jabhat al-Nusra terrorists, the Russian military has announced.

“Certain representatives of illegal armed groups have intensified attempts to get in touch with the Syrian government forces and the Russian Center for Reconciliation with the aim of discussing their separation from the banned terrorist group Jabhat al-Nusra,” Major General Yury Yevtushenko, the head of the Reconciliation Center in Syria, said in a statement on Friday.

Efforts to separate the so-called moderate opposition fighters from jihadists continue in the Damascus suburb of Eastern Ghouta. The Syrian government established a humanitarian corridor which remains open to both civilians and militants who are willing to lay down their arms.

The first group of 13 militants used the gateway to leave the rebel-controlled Damascus suburb via Muhayam al-Wafideen corridor overnight. Video of the exodus under government watch shows fighters carrying their belongings and boarding vehicles to head to Idlib. Yevtushenko attributed the militant surrender to the “lengthy talks” held by the reconciliation center’s officers and jihadist groups.

No provocations followed the exit of militants, the general said, adding that those who have surrendered will be transported to Idlib, while negotiations continue regarding the surrender of other militants. The news of militants’ surrender coincided with a statement by the Jaysh Al-Islam group, which allegedly agreed to release Tahrir al-Sham (HTS) fighters from their prisons and send them towards Idlib as well.

The situation in East Ghouta remains tense, Yevtushenko said, stressing that terrorists continue shelling civilian areas of Damascus and targeting those who are trying to flee the terrorist enclave. “The attacks are carried out even during the humanitarian pauses,” the general said, noting that none of the civilians managed to safely exit the terrorist-controlled areas in the past day.

The situation is getting so dire that people are prepared to flee by bypassing the corridors which are targeted by the militants, Yevtushenko said, citing reports received through the Russian Centre’s hotline.