TEHRAN, March 19 -The top national security advisers of the US, South Korea and Japan have met at the weekend to discuss ways to achieve a nuclear-free Korean Peninsula ahead of a possible summit between North Korean leader Kim Jong-un and US President Donald Trump. 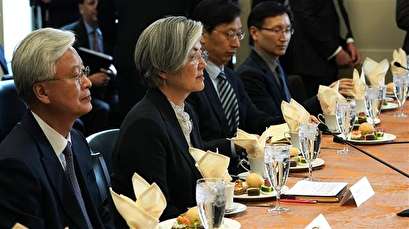 TEHRAN,Young Journalists Club (YJC) -The top national security advisers of the US, South Korea and Japan have met at the weekend to discuss ways to achieve a nuclear-free Korean Peninsula ahead of a possible summit between North Korean leader Kim Jong-un and US President Donald Trump.

South Korea’s presidential Blue House said on Monday that the security advisers from the three countries held talks on the “complete denuclearization of the Korean peninsula,” agreeing that “it was important to not repeat the mistakes of the past” and to work together closely.”

During the two-day meeting, they also discussed possible meetings between South Korean President Moon Jae-in and the North’s leader.

Earlier, Seoul said Kim has agreed to hold summit talks with Moon in late April. It said the North’s leader proposed a meeting with the US president. Trump almost immediately agreed to meet Kim by the end of May, without any preconditions.

The White House, however, later set conditions for such a summit.

“The president will not have the meeting without seeing concrete steps and concrete actions take place by North Korea, so the resident will actually be getting something,” said White House spokeswoman Sarah Sanders. “We look forward to the denuclearization of North Korea. In the meantime, all sanctions and maximum pressure must remain.”

On Monday, South Korea’s foreign Minister Kang Kyung-wha said the North’s leader “has given his word” that he is committed to denuclearization.

Kang told CBS News that this is “the first time that the words came directly” from the leader.

Seoul has asked the North “to indicate in clear terms the commitment to denuclearization” and Kim has “conveyed that commitment,” she added.

This is while the North has given no public response to Trump in the nearly two weeks since Kim was said to have accepted the invitation.

“We believe the North Korean leader is now taking stock,” the South’s foreign minister said. “We give them the benefit of the doubt, and the time that he would need to come out with some public messaging.”

In the meantime, North Korean officials have also been busy with diplomatic missions ahead of the summits with Seoul and Washington.