US approves $1 billion in weapons sales to Saudi Arabia 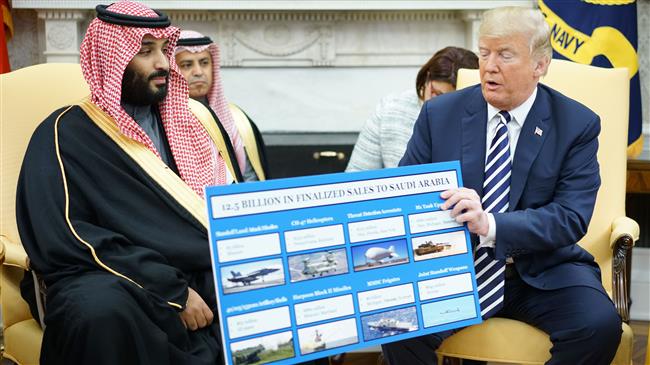 TEHRAN,Young Journalists Club (YJC) - The US State Department confirmed on Thursday it had authorized a $670 million deal for anti-tank missiles, a $106 million contract for helicopter maintenance and $300 million for ground vehicle parts.

A US official said the deals were in the planning process since President Donald Trump announced more than $100 billion in potential new arms contracts on a visit to Riyadh last year.

"This proposed sale will support US foreign policy and national security objectives by improving the security of a friendly country," the US Defense Department said in a statement.

In theory, the US Congress could still block the latest deal, but on Tuesday the Senate voted down a bill to halt US support for the Saudi-led military coalition against Yemen.

Amnesty International slammed the United States, Britain and other Western countries on Friday for their continued arms sales to Saudi Arabia and the United Arab Emirates, as their forces wage a brutal war in Yemen.

The UK-based rights group said the arms sales have been an "enormous harm to Yemeni civilians" over the course of the war.

"But this has not deterred the USA, the UK and other states, including France, Spain and Italy, from continuing transfers of billions of dollars' worth of such arms," Maalouf added. "As well as devastating civilian lives, this makes a mockery of the global Arms Trade Treaty."

The US, along with the UK, has been the main arms provider to Saudi Arabia during the military campaign The US has also provided intelligence and logistical support.

Since it began in 2015, the conflict has killed about 14,000 people, displaced more than 2 million and driven Yemen to the verge of widespread famine.

The new arms deal comes as Saudi Crown Prince Mohammed Bin Salman, the kingdom's de facto ruler, is part-way through a three-week multi-city tour of the United States, which has already taken him to talks with Trump in Washington.

During Tuesday’s visit to the White House, Trump praised the “great friendship” with Saudi Arabia and its crown prince.

The US president also displayed charts to show the depth of Saudi purchases of US military hardware and what he said were the number of American jobs they are creating.

Salman, 32, is also expected to meet with leaders of Congress and Cabinet officials such as Defense Secretary James Mattis and Mike Pompeo, CIA director and Trump’s new pick to replace Rex Tillerson as secretary of state.

Observers say the trip is mainly meant to consolidate his grip on power at home and push for an ambitious nuclear deal.

According to the SIPRI report, which was released last week, Saudi Arabia increased its arms purchases by 225 percent over the past five years, importing 98 percent of its weapons from the US and EU countries.