TEHRAN, April 01 -The Syrian army has announced “full victory” against terrorist groups in Eastern Ghouta area in the suburb of the capital Damascus after months of intense fighting, Syria’s state-run media outlet says. 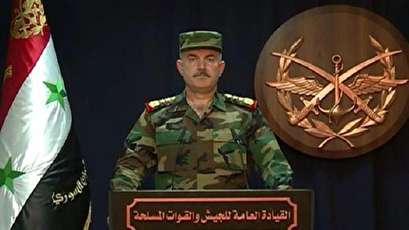 “Following a series of well-planned battles and combat operations marked with high levels of cooperation and coordination between different types of forces, the armed forces aided by allied forces wrapped up military operations in Damascus countryside’s Eastern Ghouta, with full control established all over its cities and towns,” said a statement by the General Command of the Army and Armed Forces on Saturday.

The victory “dealt a crushing blow to the Wahhabi project against the Syrian land and people,” the statement added.

Combat still continues with the so-called Jaish al-Islam Takfiri group in the vicinity of Douma city, the last militant bastion in Eastern Ghouta, as army units secured the exit of tens of thousands of civilians whom the terrorists had used as human shields, the statement said.

The Syrian army noted that during the operations in Eastern Ghouta, the Syrian forces managed to liberate dozens of towns and villages and eliminate scores of terrorists, command centers and arms depots, noting that the liberation of the area secures the basic roads connecting Damascus to central, northern and coastal regions as well as eastern borders with Iraq.

The Army’s General Command reaffirmed its resolve to continue the ongoing campaign against the remaining terrorist groups across Syria and called on anti-government elements in others parts of the country to immediately surrender and have their legal status settled.

Liberation of Eastern Ghouta is considered Syria’s largest victory against terrorists since the 2016 recapture of Aleppo.

Eastern Ghouta, which is home to nearly 400,000 people, fell to multiple militant groups in 2012, months after Syria plunged into crisis and has since served as a launch pad for fatal attacks against residents and infrastructure in Damascus.