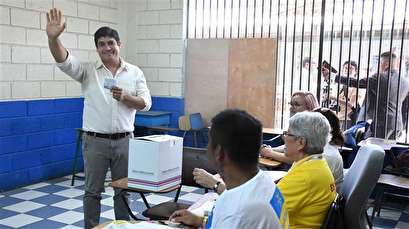 Alvarado Quesada, who will be the youngest president in the modern history of Costa Rica, used the campaign to appeal to the progressive streak in a country known for pacifism and ecological stewardship. He has promised to allow gay marriage.

Alvarado Munoz, best known for religious dance songs and ballads, has vowed to restore what he calls traditional values by preventing gay marriage and restricting women’s access to abortions.

At a polling place in the western Pavas neighborhood of the capital San Jose, Alvarado Quesada, until recently a minister in the outgoing government also known for his student rock band, voted and spoke briefly to supporters.

“Costa Rica is an amazing country and we want to not only preserve its great democracy, its peaceful nature, its respect for the environment and human rights, but we also want to move Costa Rica forward,” he said.

Shortly after Alvarado Munoz cast his vote at a school in the capital he pledged to lead a government free of bias, in a possible sign that he had sensed his hardline stance was turning off centrist voters.