TEHRAN, April 06 - A Gaza health official said a Palestinian man has been killed by Israeli fire and 40 people have been injured in protests on the Gaza border. 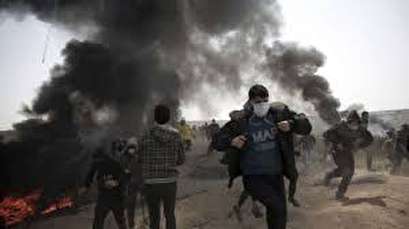 TEHRAN, Young Journalists Club (YJC) - Health Ministry spokesman Ashraf al-Kidra says the man was killed on Friday near the Gaza town of Khan Younis. The man was said to have been killed by a shot to the head, AP reported.

Al-Kidra says 40 people were injured, five of them seriously, but did not provide a breakdown of the types of injuries, AP reported.

The casualties were the first as new violent incidents erupted on Friday along the Gaza border. Palestinian protesters burned tires, sending black smoke billowing into the air.

The U.N. human rights office says it has indications that Israeli forces used "excessive force" during a deadly crackdown on protesters last week in Gaza, and is expressing concerns about possible further violence.

Spokeswoman Elizabeth Throssell noted on Friday that Israeli forces are required under international human rights law to use nonviolent means "to the extent possible."

She says live fire by Israel forces killed 16 people and reportedly wounded more than 1,000 others, many who were unarmed. She also said there were "ominous statements" from Israeli authorities leading up to protest.