TEHRAN, April 07 -The Non-Aligned Movement has condemned the illegal policies of Israel, calling for collective efforts to end its occupation of Palestinian territories. 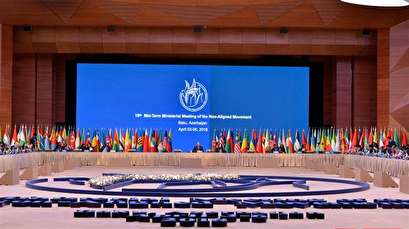 TEHRAN, Young Journalists Club (YJC) -The Non-Aligned Movement has condemned the illegal policies of Israel, calling for collective efforts to end its occupation of Palestinian territories.

"We condemn the illegal policies and practices by Israel, the occupying power, against the Palestinian people, including, inter alia, the construction and expansion of illegal settlements, the demolition of Palestinian homes and properties, the acts of collective punishment against the civilian population, including the imprisonment and detention of thousands of civilians, disruptions of normal flow of people and traffic through various security checkpoints, closures and barricades, as well as the illegal blockade of the Gaza Strip," foreign ministers of NAM member states said in a statement at the end of their two-day meeting in the Azeri capital city of Baku on Friday.

The NAM statement called for collective efforts to bring a complete end to the Israeli occupation of the Palestinian lands, saying the regime must withdraw to territories it occupied before 1967.

The statement also condemned the killing and injuring of hundreds of Palestinian protesters in the besieged Gaza Strip during Land Day protests on 30 March by Israeli regime forces, and called on Tel Aviv to immediately end all such "grave breaches of the law."

The statement came as thousands of Palestinian protesters gathered in locations near Gaza’s fence with the occupied territories to mark a six-week rally dubbed the “Great March of Return,” which began last Friday.