NATO to deploy 35,000 troops in largest-ever drills in Norway

TEHRAN, April 17 -A total of 30 countries will send some 35,000 soldiers, more than 120 aircraft, 70 ships and 10,000 vehicles to the largest-ever drills held by NATO in Norway, sources in the military alliance have announced. 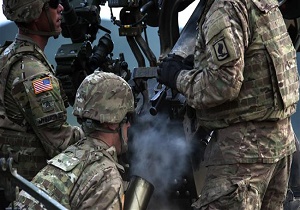 TEHRAN, Young Journalists Club (YJC) - Frank Solvsberg, spokesperson for the drills, said Tuesday that the Trident Juncture, which will be held across Norway in October and November, would be three times larger than any other prior military exercise carried out in the Scandinavian country.

“This will be a very big and important exercise that will affect many,” said Solvsberg about the Trident Juncture, which takes place every three years and was last held in the Mediterranean around Italy, Spain and Portugal.

Norwegian sources said the 35,000 troops would be scattered around Norway so that they would be “very visible” in large parts of Norway’s southeastern and central territories.

More than a hundred Norwegian municipalities will be “directly or indirectly” affected, according to the warnings given to the Norwegians about the big drills.

Preparations will get underway as early as August while the main part of the drills will come between October 25 and November 7.

Air, land, maritime, special operation forces and amphibious forces will take part in the operations, which will also cover Iceland, and the airspace of Finland and Sweden and other areas surrounding the North Atlantic and the Baltic Sea.

The massive military maneuvers will come amid heightened tensions between the West and Russia over a crisis in Syria. The United States, France and Britain launched over 100 airstrikes on a series of military facilities in Syria last weekend, a move harshly condemned by Moscow.

NATO has already increased its activity around Russia, especially in the Baltic region, in response to Moscow’s alleged involvement in a conflict in Ukraine.

However, there has been no clear sign that Russia may pose a threat to countries in the Scandinavia, especially to Norway. Norway's Foreign Minister Ine Eriksen said Tuesday that the threat of war in the Arctic, NATO's northern flank, was “low” and that Oslo did not see Moscow as a military threat.

Russia has also reacted angrily to Norway’s decision to discuss extended presence of US Marines on its soil. The Russian embassy in Oslo said Saturday that the move would worsen its relations with Moscow and could escalate tensions on NATO's northern flank.