TEHRAN, April 18 - Nigerian police fired teargas at hundreds of Shia Muslim protesters on Tuesday during a second day of clashes in the capital Abuja over the imprisonment of their religious leader. 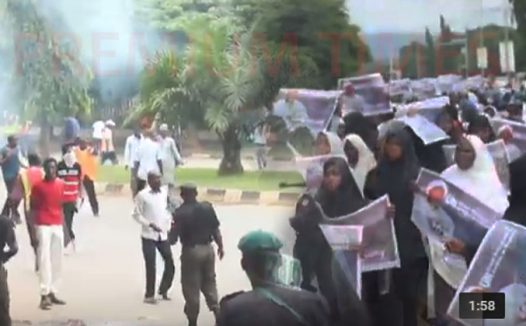 TEHRAN, Young Journalists Club (YJC) - The protesters are demanding the release of Sheikh Ibrahim Zakzaky, leader of the Islamic Movement of Nigeria (IMN), held in jail without charge since 2015, when security forces killed hundreds of members in a crackdown on a group estimated to have three million followers.

The teargas flooded the Wuse Market area of Abuja at midday on Tuesday, Reuters witnesses said. On Monday police fired bullets to try and disperse the protesters, and organizers said at least one demonstrator had been killed and several others injured.

The crackdown on the IMN and the detention of its leader have drawn accusations that President Muhammadu Buhari’s government is abusing human rights.

The IMN, which has held regular peaceful protests in Abuja in recent months, says Zakzaky must be freed after a court ruled that his detention without charge was illegal.

The top Shia cleric lost his left eyesight in the raid which was carried out by the Nigerian army on his residence in the northern town of Zaria in December 2015.