TEHRAN, April 18 - Libya's navy said it has rescued 217 African migrants from two rubber boats that were stranded in the Mediterranean Sea. 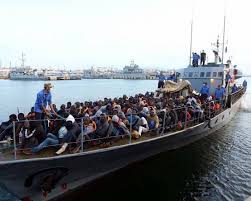 TEHRAN, Young Journalists Club (YJC) - A navy statement issued Wednesday says there were 85 women and 10 children among the migrants, who were trying to reach southern Europe.

The navy said the migrants, who were found on Tuesday, were taken a naval base in the capital, Tripoli.

Libya was plunged into chaos following a 2011 uprising and is now split between rival governments in the east and west, each backed by an array of militias.

The chaos has made Libya a frequently used route to Europe for migrants fleeing poverty and conflicts in Africa and the Middle East.

Libya has worked to stem the flow of migrants, with assistance from the European Union.