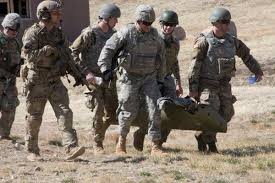 He says women and children are among the victims.

No one immediately took responsibility for the bombing but Khogyani blamed the Taliban, saying they regularly plant roadside bombs targeting Afghan officials and security forces.

Afghanistan has the highest number of mine victims in the world, which along with other roadside bombs kill or wound scores of civilians.

Earlier this month, the U.N. mission in Afghanistan said the country's civilian death toll in the first three months of this year was a staggering 763 people.