Iran's response readiness will startle US if it pulls out of JCPOA: Salehi

TEHRAN, April 21 - Iran's nuclear chief said the Islamic Republic's response readiness will "startle" the United States should it decide to pull out of a multilateral nuclear agreement reached between Tehran and the P5+1 group of countries in 2015. 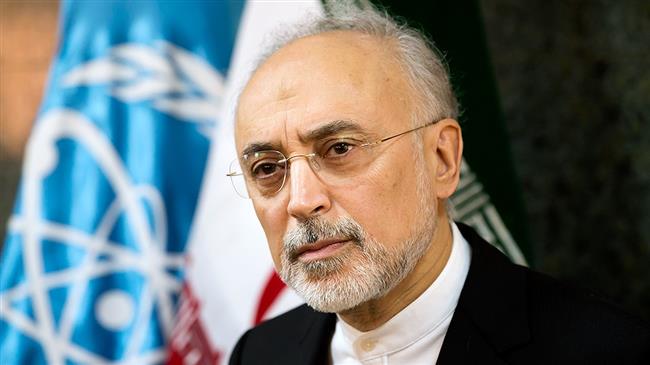 TEHRAN, Young Journalists Club (YJC) - "We hope that the other side makes a wise decision and avoids carrying out an action that would put it and others into trouble," Head of the Atomic Energy Organization of Iran (IAEA) Ali Akbar Salehi told reporters on Saturday.

He added that Iran has repeatedly expressed hope that circumstances would never make it take "technical decisions."

Salehi once again reaffirmed Tehran's capability to resume enriching uranium to the 20-percent level in four days in response to a possible US withdrawal from the nuclear deal, officially known as the Joint Comprehensive Plan of Action (JCPOA).

"Once the [Islamic] establishment decides, we are ready like an army to take action," the Iranian nuclear chief added.

US President Donald Trump is a stern critic of the nuclear deal reached between Iran and the five permanent members of the UN Security Council -- the United States, France, Britain, China, Russia - plus Germany. Under the agreement, nuclear-related sanctions put in place against Iran were lifted in exchange for curbs on Tehran's nuclear program.

He has repeatedly described the JCPOA, which was negotiated under his predecessor, Barack Obama, as “the worst and most one-sided transaction Washington has ever entered into” and threatened to tear it up.

In January, the US president decided to stick with the JCPOA, but gave the European signatories a May 12 deadline to “fix the terrible flaws” of the accord or he would withdraw Washington from the deal.

Other parties to the agreement have all criticized Trump’s hostile views, saying the deal is sound and has proven to be functioning.

The European Union foreign policy chief, Federica Mogherini, on Monday reiterated the bloc's strong and unequivocal commitment to the full implementation of the JCPOA by all sides, saying preserving the deal was vital.

Mogherini’s remarks came a day after the Iranian nuclear chief said that it would be humiliating for Europe to follow suit with the US policy on the nuclear deal with Iran.

Salehi warned Europeans against following in Washington's footsteps on the landmark nuclear deal, saying, "This means that Europe is not an independent body and is a satellite in the US political orbit."