Thousands of Zimbabwe nurses call off walk out

TEHRAN, April 22 - Thousands of Zimbabwe nurses who were sacked after they went on strike for better wages have been told to return to work by their union, in a bid to allow fresh negotiations with the government. 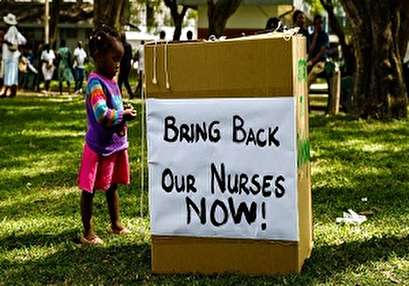 Vice President Constantino Chiwenga, dismissed them a day after, accusing them of being "politically motivated."

"To pave way for re-opening of negotiations and protection of our workers we have decided to call off the industrial action," the Zimbabwe Nurses Association said in a statement Saturday night, urging all nurses to report for duty by Monday.

The nurses said their strike had been politicized, but gave no details.

"It is highly regrettable that our cause of collective job action has been highly politicized," said the statement.

The nurses are demanding better wages and are complaining about lack of basics in government hospitals, including drugs.

After sacking the striking nurses, the government resorted to hiring unemployed nurses and recalling those who have retired to fill the vacant posts.

The nurses on Friday filed an urgent application in court seeking to have their dismissals nullified.

They asked the High Court to "restrain and interdict" the government "from terminating the services of some striking nurses and to stop the government from recruiting new staff", according to a statement from the country's human rights lawyers.

The court ruling is yet to be handed down.

The dismissal of the nurses was seen as a hardline response by the country's new leadership to growing labor unrest.