The EU and UN have held a two-day conference in Brussels in an attempt to boost humanitarian aid for Syria from international donors, as the seven-year crisis continues to take its toll on millions of people in the country. 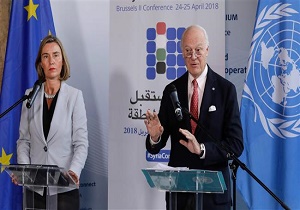 Senior UN and EU officials are scheduled to hold talks with aid organizations working in Syria and neighboring countries before government ministers meet on Wednesday.

While according to EU figures, the total aid provided by international community after the 2017 conference was $7.5 billion, the bloc hopes to gather more help in this year’s conference.

"We have seen the situation get dramatically worse since the beginning of the year. We have had inside Syria some 700,000 displaced during a period of four months," AFP quoted a senior EU official as saying.

According to the EU, nearly 6.1 Syrian are currently internally displaced, over five million have fled the country and 13 million other are in need of assistance.

One third of Syrian youngsters are out of school and a third of schools in the country cannot be used due to the war, Save the Children International chief executive Helle Thorning-Schmidt said.

UN children's agency UNICEF said nearly 2.8 million Syrian children had stopped their education, warning that going to school in some parts of Syria "has at times become a matter of life and death."

The war crisis has killed nearly half a million people inside Syria. Meanwhile, over 400,000 people are still trapped in different areas under siege.

The Syrian government and opposition groups are already involved in a political process mediated by Russia, Iran and Turkey in Astana, Kazakhstan.

The talks have led to the formation of four de-escalation zones across Syria and helped significantly reduce violence in the country.

The talks in Astana have been going on in tandem with another series of talks held in Geneva and brokered by the UN. Previous rounds of negotiations under the auspices of the UN over the past five years have failed to achieve tangible results.