White House in no position to decide for Middle East: President Rouhani

TEHRAN, April 25 - Iranian President Hassan Rouhani has slammed US interventions in the Middle East, saying the White House is not in a position to make decisions for all nations in this region. 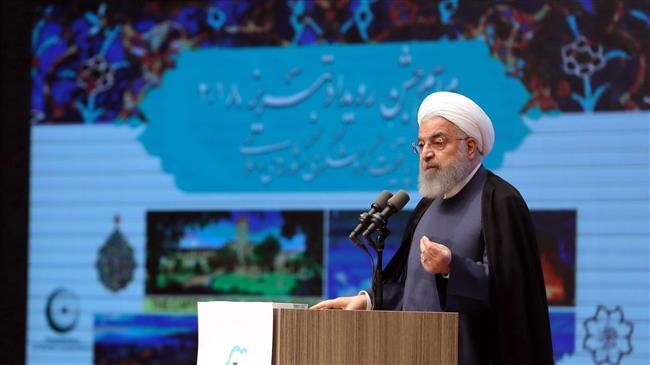 TEHRAN, Young Journalists Club (YJC) – Speaking at a ceremony in the northwestern city of Tabriz on Wednesday, Rouhani said many of the problems facing the Middle East stem from fallacious viewpoints and statements about its peoples, noting that some countries think that an “oppressive and occupying regime” must permanently dominate the people of other countries.

“They think that the White House must decide for the Middle East. This way, they think they can plunder all the resources of the Arab world,” Rouhani pointed out.

“Where have you set your greedy eyes on? On the underground reserves of black gold [referring to oil reservoirs] or the multi-billion-dollar bank accounts of certain regional Arab countries?” the Iranian president asked, addressing US officials.

Rouhani noted that US officials tend to adopt stances that are not congruent with the conditions of the modern age and the dignity of Middle Eastern nations. “You overtly assert that you will stay [in the region] with the money of other [countries]. Therefore, you are a mercenary of other [countries]. Your army is looking for a resource to plunder and feed on. Does this bring you dignity?”

Rouhani further referred to statements by US President Donald Trump who said Tuesday that some “immensely wealthy” countries in the Middle East have to pay for American protection and deploy their own troops in Syria.

“You say if you pay us money, we will stay in Syria, and if you do not, we will leave. [You say] if we are not here, you will cease to exist in a matter of a week. Why would they? We are protecting Iraq. The Iraqi nation is protecting Iraq. We are prepared to protect Saudi Arabia. The Saudi nation is protecting Saudi Arabia. By the way, if you care to leave forever, security will be totally restored to the region,” he added.

Speaking at a news conference with French President Emmanuel Macron on Tuesday, Trump said those "immensely wealthy" countries "wouldn't last a week" without US support.

The Iranian president slammed the West’s “wrong viewpoints” which have brought about myriads of problems for the people in the region, and asked, “You have supplies all those warplanes and bombs to Saudi Arabia. Have you managed to restore security?”

According to a report by the Stockholm International Peace Research Institute (SIPRI), which was released in March, Saudi Arabia increased its arms purchases by 225 percent over the past five years, importing 98 percent of its weapons from the US and EU countries.

Rouhani pointed to the US and French presidents’ call for major changes to Iran’s nuclear deal despite repeated objections by other signatories to the agreement.

“You, along with the leader of some European country, are deciding for an agreement reached among seven parties. Who allowed you to do that?” Rouhani said, addressing Trump.

Rouhani argued that Iran’s nuclear agreement, known as the Joint Comprehensive Plan of Actions (JCPOA), showed Tehran’s good will to the world, proved the Iranophobia campaign to be wrong and demonstrated to the global community that the so-called possible military dimensions (PMD) dossier for Iran’s nuclear program, which unfairly imposed anti-Iran resolutions under Chapter VII of the UN Charter, was a “lie.”

The UN Charter’s Chapter VII authorizes the UN Security Council to allow measures such as sanctions or military intervention if countries do not meet its demands.

“Through this agreement, we showed the slanderers to the world and proved that the US and Israel had been lying for decades,” Rouhani said.

Despite repeated assertions by Iran and other signatories to the JCPOA that the nuclear deal is non-negotiable, Trump and Macron announced in a press conference at the White House on Tuesday that the deal should undergo major changes.

Macron said a new deal should incorporate three additional elements, including Iran’s ballistic missile program, the Islamic Republic’s regional influence and what happens after 2025 when Tehran will restart part of its nuclear program under the accord.

Trump, who currently faces a May 12 deadline to announce his final position on the Iran deal, said, “I think we will have a great shot at doing a much bigger, maybe, deal,” claiming that any new deal will be based on "solid foundations."

Iran has repeatedly warned that any failure to respect the multinational agreement would have grave consequences, stressing that there is no alternative to the nuclear accord.

Amid Trump’s threats, other parties have stepped up diplomatic efforts to save the deal.

Russia and China have also issued a draft statement, calling on the UN member states to express their “unwavering support” for Iran’s nuclear agreement.