Iran hits out at 'rogue' Israel after new threats

TEHRAN, April 27 - Iran's envoy to the United Nations said the Israeli regime has proven its "rogue" nature by adopting "expansionist, aggressive and apartheid" policies that are the root cause of all conflicts in the Middle East region. 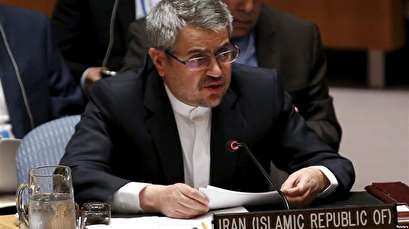 TEHRAN, Young Journalists Club (YJC) – "Indeed, Israel is a rogue regime, by definition - this is an undeniable fact for the international community, except for those who believe illegal occupation, illegal settlements, apartheid, siege, and regular attacks of mass murder are the legitimate actions of a regime that proclaims itself as the only democracy in the Middle East," Gholamali Khoshroo said in a statement addressed to the UN Security Council on Thursday.

Khoshroo criticized the United States and other members of the council for granting Israel a sense of "exceptionalism" that has allowed Tel Aviv to constantly undermine peace in the region without ever having to worry about the consequences.

"The impunity this regime has enjoyed for so long wouldn’t have been possible without the help it receives from the US and certain interest groups," he added.

The statement followed a series of military threats by Israeli officials against various countries in the region-- including Iran and Syria-- which have gone unnoticed by the UN Security Council.

On April 9, Israeli leaders proudly announced that they had conducted a missile attack against the T-4 airbase in Syria's Homs province, where Iranian and Russian military advisors were stationed on a mission to assist Syrian military forces in the war against Daesh and other foreign-backed militants.

The attack killed more than a dozen people, including seven Iranian military advisors.

Israeli officials have made it clear that they would not refrain from orchestrating similar attacks in future.

“Every outpost in which we see Iran positioning militarily in Syria, we will destroy, and we will not allow this no matter what the price,” Lieberman told Elaph.

The blatant threat drew a response from Chairman of the Chiefs of Staff of the Iranian Armed Forces Major General Mohammad Baqeri, who said Friday morning that the attack on T-4 was nothing but small "fireworks" that were never going to stop Iran's influence in the region.

Baqeri also downplayed reports that some regional countries were joining forces with Israel to form a front against Iran.

"If they (Israelis) think that these childish actions and coalitions will help them continue their disgraceful lives, they are gravely mistaken," he said, noting that the future was looking "bright and clear" although there were a few bumps on the road as well.

In his statement, Khoshroo also pointed to Israel's deadly crackdown on anti-occupation protests in the Gaza Strip and said Iran " reaffirms its solidarity with the Palestinian people."

Protests along the Gaza fence since March 30 have led to clashes with Israeli forces, who have killed at least 38 Palestinians and injured hundreds of others.

The rally, dubbed the "Great March of Return," will last until May 15, which coincides with the 70th anniversary of Nakba Day (Day of Catastrophe) on which Israel was created.

Calling the violence "planned and deliberate," the Iranian envoy said, "Those who support and enable the Israeli regime to commit these types of crimes have also the Palestinians’ blood on their hands."