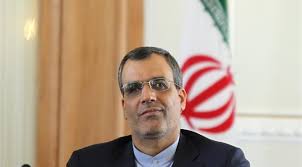 TEHRAN, Young Journalists Club (YJC) – Speaking to reporters in Moscow on Saturday, Jaberi Ansari, who accompanies Foreign Minister Mohammad Javad Zarif in his official visit to Russia, said up to now two rounds of meetings between the presidents of Iran, Russia and Turkey have been held and a third round is going to be done in Iran, according to Tasnim dispatches.

He further said a meeting is planned to be held in Moscow later on Saturday at the level of foreign ministers of the three countries.

Jaberi Ansari also said that during the trilateral talks between Zarif and his Russian and Turkish counterparts, Sergei Lavrov and Mevlut Cavusoglu, in Moscow, the top diplomats would discuss the Syria peace process in the Kazak capital of Astana.

Heading a high-ranking delegation, Zarif arrived in Moscow on Saturday to pay a one-day visit to Russia and hold trilateral and bilateral talks with his Russian and Turkish counterparts.

Earlier this month, the presidents of Iran, Russia and Turkey –the three guarantor states of de-escalation zones in Syria- held a meeting in Ankara to discuss ways for peaceful settlement of the crisis in Syria.

Since January 2017, Kazakhstan’s capital of Astana has hosted several rounds of peace talks that led to an agreement on de-escalation zones across Syria.

The talks in Astana have been going on in tandem with UN-brokered Geneva talks.

According to reports, the conflict that broke out in Syria in 2011 has claimed the lives of over 470,000 people, injured 1.9 million others, and displaced nearly half of the country’s pre-war population of about 23 million within or beyond its borders.