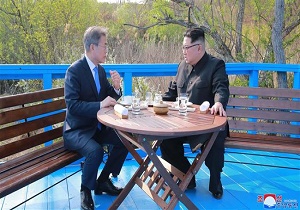 TEHRAN, Young Journalists Club (YJC) – In a telephone call on Sunday, Moon briefed Abe on his historic summit on April 27 with Kim. According to the South Korean president's spokesman, Kim told Moon in their summit meeting that North Korea was ready for talks with Japan.

"President Moon told Kim that Prime Minister Abe had an intention talk to the North and... normalise diplomatic ties between the North and Japan," Spokesman Kim Eui-kyeom told reporters, adding, "And Kim said that the North was willing to talk to Japan any time."

According to the spokesman, Abe said Tokyo would seek to create "an opportunity to talk to the North," with Moon's help if necessary, and the South's leader said he would be "happy to build a bridge" between the two nations.

Abe had earlier informed Seoul of his intention for talks with North Korea's leader.

The heads of state of the two Koreas held their historic summit at the border village of Panmunjom in the Demilitarized Zone on Friday. During the meeting, the South Korean president expressed hope for the achievement of a "bold agreement."

The Japanese premier had cautiously welcomed the inter-Korea summit but urged Pyongyang to take "concrete action" toward nuclear disarmament.

North and South Korea began mending fences in January, when Kim said he would be interested in talks between officials from the two countries.

North Korea says its weapons are defensive in nature and a necessary deterrent against potential hostility by the United States and its regional allies.

The US has imposed many rounds of sanctions on North Korea, has substantial military presence near the country, and has numerously threatened to invade it.

Tensions on the Korean Peninsula were running high in 2017. US President Donald Trump’s threats last year prompted North Korea to carry out its most powerful nuclear test to date and launch intercontinental ballistic missiles capable of reaching the United States, but Kim expressed sudden interest in the resolution of disagreements with the South on New Year’s Day, and a series of overtures began.

A possible meeting between Kim and Trump is also reportedly being planned for sometime in May or June.