TEHRAN, May 10 - Police in Kazakhstan have reportedly detained dozens of anti-government protesters staging unauthorized rallies across the Central Asian country. 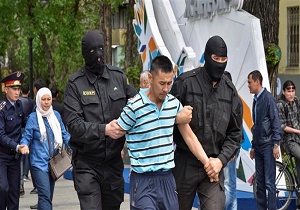 TEHRAN, Young Journalists Club (YJC) – The demonstrations on Thursday had been organized at the behest of foreign-based opposition figure Mukhtar Ablyazov, and called for the release of political prisoners in Kazakhstan.

The largest rally was staged in Almaty, with more than a hundred participants, who held up portraits of jailed activists and chanted “Freedom to political prisoners!”

The Almaty police department said in a statement that some of the protesters had been taken to a police station “to determine the circumstances” of the event.

A Reuters correspondent at the scene said he had seen police detain at least 50 people.

Smaller rallies were also staged in the capital, Astana, and Shymkent. Some participants in those gatherings were also reportedly detained.

Ablyazov, a former banker and a fierce critic of incumbent President Nursultan Nazarbayev, was convicted in absentia on fraud charges at home. The opposition figure lives in France and has used social networks to trigger unrest in Kazakhstan.

A court in the country ruled in March that Ablyazov’s political movement, the Democratic Choice of Kazakhstan (DVK), was a radical group and its supporters could therefore face criminal prosecution.