UN calls on US to stop separating migrant children from parents

TEHRAN, June 05 -The United Nations has called on the administration of US President Donald Trump to "immediately halt" its controversial practice of separating Central American immigrant children from their parents at the southern border. 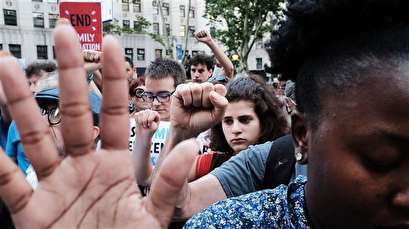 TEHRAN, Young Journalists Club (YJC) -The UN human rights office on Tuesday censured the Trump administration for its "zero tolerance" policy about undocumented immigrants in which some families have been separated after crossing the border.

The rights office said that "children should never be detained for reasons related to their own or their parents' migration status. Detention is never in the best interests of the child and always constitutes a child rights violation."

Spokeswoman Ravina Shamdasani told a UN briefing that the practice of separating children from families “amounts to arbitrary and unlawful interference in family life, and is a serious violation of the rights of the child."

She warned the American policy had "led to people caught entering the country irregularly being subjected to criminal prosecution and having their children -- including extremely young children -- taken away from them as a result."

A large number of children have been separated from their parents, who were arrested after they entered the United States.

Shamdasani said that several hundred children have been separated from their parents at the border since October. "The US should immediately halt this practice," she said.

"The use of immigration detention and family separation as a deterrent runs counter to human rights standards and principles," she noted.

The Trump administration has increased security on the US border with Mexico and has pledged to prosecute refugees and migrants who cross it.

The anti-immigration policy, which officially went into effect last month, has prompted heavy criticism from advocates for separating children from parents as a deterrence measure.

Attorney General Jeff Sessions announced a “zero-tolerance policy” in early May, ordering federal prosecutors to peruse criminal charges against all referrals for illegally crossing the border, as possible.

“So, if you cross the border unlawfully…If you're smuggling a child, we're going to prosecute you, and that child will be separated from you, probably, as required by law,” Sessions said.

"If you don't want your child separated, then don't bring them across the border illegally. It's not our fault that somebody does that,” he added.

The controversial policy, however, caused officials to lose track of children — an already existed problem — in the US foster care system, according to an NBC report.

While parents are imprisoned, according to the report, their kids are turned over to the Office of Refugee Resettlement, part of the Department of Health and Human Services.

The children are then designated as "unaccompanied minors,” and the government tries to connect them to family members who are already in the United States.

He slammed those who "recklessly and improperly" cross the US-Mexican border with children in tow.

"If people don’t want to be separated from their children, they should not bring them with them. We’ve got to get this message out," he said.