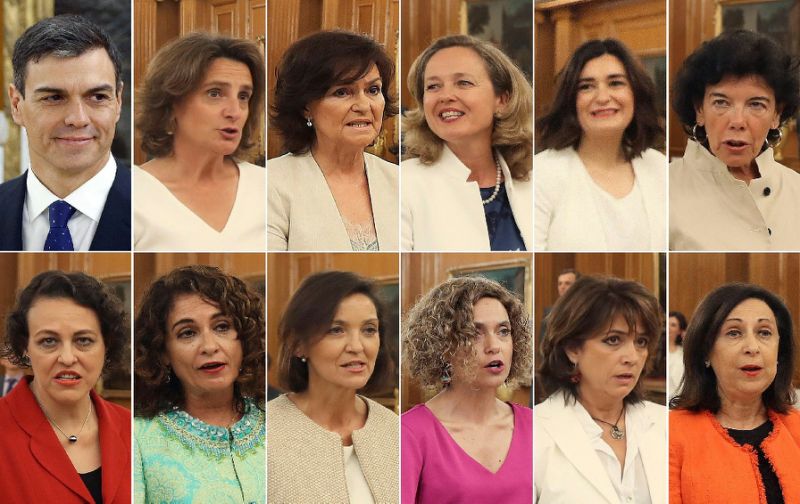 That makes it the European government with the highest ratio of female cabinet ministers, ahead of Sweden's, which has 12 women and 11 men.

Sanchez's administration risks not lasting until the end of the current mandate in 2020, however, given the fragmented state of Spain's political parties.

His Socialist Party holds just 84 seats in the 350-seat congress. That is the smallest parliamentary presence of any Spanish government since the return to democracy in the 1970s.

The vote was sparked by corruption convictions against former officials from Rajoy's Popular Party (PP).

It ended more than six years of PP government and ushered in a progressive administration under Sanchez.

The ministers at the swearing-in ceremony at the Zarzuela palace near Madrid broke with tradition by taking their oaths on the country's constitution rather than the Bible.

They followed the example set by Sanchez, who became the first Spanish prime minister to forego religious symbols during his own swearing-in on Saturday.

The first minister to take the oath was veteran Socialist Carmen Calvo, a former culture minister, who became deputy prime minister and will also be in charge of equality.

Equality is a priority for Sanchez's government in a country where women staged an unprecedented strike to defend their rights on March 8.

"This is a government that has to work every day for the most important thing in democracy: to reduce inequalities, and build the greatest equality, that between men and women," she said after being sworn in.