TEHRAN, June 09 - Russian President Vladimir Putin said Saturday that Russia was ready to improve relations with the US, including through personal meetings. 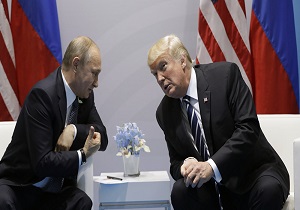 TEHRAN, Young Journalists Club (YJC) - Russian President Vladimir Putin said Saturday that Russia was ready to improve relations with the US, including through personal meetings.

"We can differently assess decisions that are taken by the United States, including by the US president. They can be criticized. Indeed, there is much that should be criticized. But there is one thing that I have already mentioned — Trump fulfills his promises given during the election campaign… One of the promises is to improve the Russian-US relations. I hope that this too will be fulfilled," Putin said in an interview, released on the website of the Vesti media outlet on Saturday.

The Russian president noted that relations between leaders of states should be "civilized," adding that Russia was ready to improve and develop relations with the United States, including through personal meetings.

"The experience I have with the US President shows that, despite the fact that his actions are often criticized, especially recently, including in the international arena and in the area of economy, nevertheless, this experience shows me that he is a reasonable man, he knows how to listen and responds to the arguments given by the interlocutor. All this makes me believe that the dialogue can be constructive," Putin said.

The Russian president further noted that Trump was a good listener and reacted considered other people's opinion. According to Putin, he is eager to meet with his US counterpart as the dialogue can be constructive.

"We have met with the US president at international venues. Surely, such meetings give an opportunity to pay due attention to Russian-US relations. In general, I consider such a bilateral meeting to be useful. The only matter is that the US domestic political situation should let [us] do it," Putin noted.

Earlier on Saturday, Kremlin spokesman Dmitry Peskov said that there had been "no concrete arrangements, no understanding, no concrete discussions" regarding the issue yet.