May could be ousted if she loses key Brexit vote: Gordon Brown

TEHRAN, June 11 -Former British prime minister Gordon Brown has said Theresa May could be ousted if the government loses a key vote this week on its Brexit legislation, saying it could determine the premier’s future. 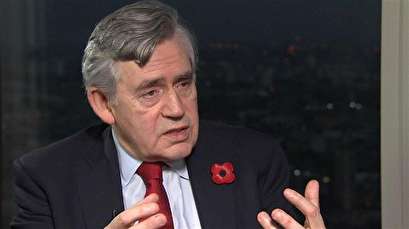 TEHRAN, Young Journalists Club (YJC) -Former British prime minister Gordon Brown has said Theresa May could be ousted if the government loses a key vote this week on its Brexit legislation, saying it could determine the premier’s future.

But he added that the ruling Conservative Party could survive in government because of the fixed-term parliament arrangement.

May’s ministers are confident that they will win most of the votes when the EU (Withdrawal) Bill returns to the House of Commons on Tuesday and Wednesday.

However, rebels in the Conservative Party believe they could suffer defeat due to key measures like the customs union and a requirement for Parliament to have a decisive say over what happens next if it rejects a final Brexit deal.

“I think what will happen if the Government loses a vote is that there is potentially the chance of a change of prime minister, but I don’t think at that point they will want to give up as a Government, and I think the five-year parliament makes it possible for them to survive,” Brown said in an interview on Monday.

According to a new poll, British voters in support of the country’s withdrawal from the European Union are losing faith in May and the Conservative Party’s ability to lead the Brexit negotiations.

The poll, conducted by Opinium and commissioned by the Observer, showed Sunday that only 32 percent of leave voters trusted the Tories with the job, the lowest level of confiden.

Meanwhile, 21 percent of the participants in the survey said the Labour Party would do a better job in handling the negotiations under the leadership of Jeremy Corbyn.

The 11-point lead that May’s party holds over Labour is the lowest margin between the two parties on this issue so far this year.

Brexiteers in the cabinet and Leave voters have been increasingly complaining that May has set a course for a soft Brexit that could see Britain stay close to EU customs arrangements and regulations.