TEHRAN, June 12 - Following days of intense fighting, Syrian government forces have thwarted an attempt by Daesh remnants to seize a strategic town near the Iraqi border, clearing all its neighborhoods of Takfiri terrorists. 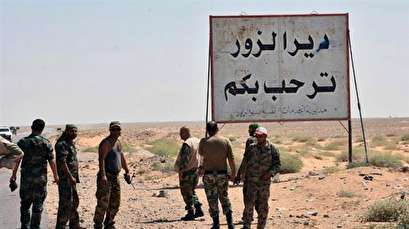 TEHRAN, Young Journalists Club (YJC) -Following days of intense fighting, Syrian government forces have thwarted an attempt by Daesh remnants to seize a strategic town near the Iraqi border, clearing all its neighborhoods of Takfiri terrorists.

The so-called Syrian Observatory for Human Rights (SOHR) said Monday that Syrian troops and their allied forces had fully secured Bukamal, which lies on the Euphrates River in the eastern province of Dayr al-Zawr after days of violent clashes with the terrorists.

Syrian “forces and their allies regained control of the whole town of al-Bukamal after expelling Daesh from its northern and northwestern parts,” said the head of the UK-based observatory, Rami Abdel-Rahman.

The terrorists had on Friday sent bombers into several neighborhoods of Bukamal to pave the way for their advance on the city.

However, surrounded by Syrian forces, the terrorists were forced to retreat to the vast Badiya region, which stretches from the country’s center to the border with Iraq, he said.

In November last year, Syrian forces announced that they liberated the town, the last Daesh bastion in Syria.

Dayr al-Zawr is the capital of an oil-rich Syrian province of the same name, which borders Iraq. The city used to serve as the main Daesh stronghold in Syria after the terror group left Raqqah in the north to US-backed Kurdish militants.

Separately, the Russian Reconciliation Center in Syria said Syrian troops backed by the Russian air force had managed to prevent the terrorists from breaking out of the southeastern al-Tanf area in Homs Province toward the city of Palmyra.

During the operation, the forces killed five terrorists and destroyed a pickup truck as well as a motorbike belonging to them, the statement said.

It said that a large group of terrorists, “moving on pickup trucks with heavy weapons and motorcycles had been located by Syrian observation posts in the area of Mount Gurab.”

The US-led coalition runs a military base in the al-Tanf. Washington has described the area, which lies at the ultra-strategic intersection of the Syrian, Iraqi, and Jordanian borders, as its “red line.”

On numerous occasions, the Russian military, which has been assisting the Syrian army in its anti-terrorism operations, has reported suspicious activities in and around the base in support of Takfiri terrorists.

US forces also maintain significant presence in northern Syria, where they back Kurdish militants operating against the Syrian government. Washington has deployed around 2,000 troops to the Arab country.

Washington and its allies have been launching attacks on Syria since 2014, claiming they seek to root out Daesh. The mission, which does not have the Syrian government’s approval or a UN mandate, is still underway despite the collapse of the terror group late last year.