TEHRAN, June 13 -The United States has imposed sanctions on the commander of Cambodian Prime Minister Hun Sen’s bodyguard unit for alleged human rights abuses, the first member of the leader’s inner circle to be blacklisted by Washington. 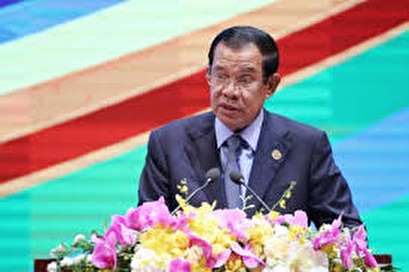 TEHRAN, Young Journalists Club (YJC) -The United States has imposed sanctions on the commander of Cambodian Prime Minister Hun Sen’s bodyguard unit for alleged human rights abuses, the first member of the leader’s inner circle to be blacklisted by Washington.

General Hing Bun Hieng, head of the Prime Minister Bodyguard Unit (PMBU), was sanctioned for “being the leader of an entity involved in serious human rights abuse,” the U.S. Treasury Department said on Tuesday.

The sanctioning of a Hun Sen loyalist comes amid increasingly strained relations between Washington and Phnom Penh. In March, Hun Sen accused the United States of lying when Washington blamed Cambodia’s military and other entities for recent political instability and suspended their aid.

An ongoing crackdown by the government and its allies ahead of a July 29 election has targeted some NGOs, independent media and opposition lawmakers. The government says it is enforcing the law and accuses opponents of conspiring with foreigners to oust it.

The PMBU has been implicated in incidents dating back to 1997, the Treasury Department said, including a 2015 attack on opposition politicians that resulted in three PMBU members going to jail. They were promoted upon their release.

The department also cited an incident where a U.S. citizen received shrapnel wounds.

Hing Bun Hieng “was personally implicated in attacks against a number of individuals, including a U.S. citizen,” Sigal Mandelker, under secretary of the Treasury for Terrorism and Financial Intelligence, said in a statement.

The sanctions, imposed under a 2012 law known as the Magnitsky Act, block any property or interest in property held by the general within U.S. jurisdiction. It also prohibits U.S. persons from engaging in transactions with Hing Bun Hieng.

Cambodia’s government did not comment, but the general’s assistant answered the phone when contacted by Reuters.

“He spends money on building schools, roads and pagodas, so let the United States freeze these funds so students and monks can’t have all these, right?” the assistant said before hanging up.

A close ally of China, Hun Sen has frequently publicly criticized the United States, particularly for dropping bombs on Cambodia during the Vietnam War, which ended in 1975.

Hun Sen has accused opposition leader Kem Sokha, who was arrested and jailed last year, of conspiring with the United States to overthrow him.

Kem Monovithya, a daughter of Kem Sokha, said she hoped U.S. pressure would lead to her father’s release.

“The U.S. government has repeatedly warned Hun Sen’s regime of the next concrete actions if he doesn’t reverse course, and that includes releasing Kem Sokha,” she told Reuters.