TEHRAN, June 15 -US President Donald Trump has said that a Justice Department watchdog report about the 2016 presidential election "totally discredited" the investigation led by Special Counsel Robert Mueller into alleged Russian meddling in the American vote. 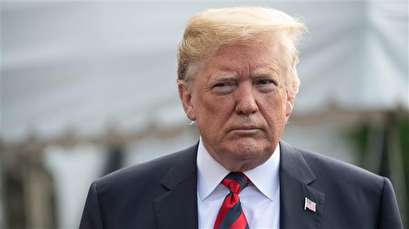 The report largely focused on the agency’s handling of the probe into Democratic candidate Hillary Clinton's misuse of a private email server.

Trump on Friday painted the Inspector General's report as proof that Mueller's investigation is biased and said the report cleared him.

"The report yesterday, maybe more importantly than anything, it totally exonerates me. There was no collusion. There was no obstruction," the US president told reporters at the White House.

"You'll see bias against me and millions and tens of millions of my followers, and that really is a disgrace,” he added.

"I did nothing wrong, there was no obstruction. The IG report yesterday went a long way to show that and I think that the Mueller investigation has been totally discredited,” he stated.

Mueller is investigating possible collusion between Russia and Trump's campaign during the 2016 presidential election.

Trump has repeatedly denied allegations that his campaign colluded with Russians and has condemned the investigations. Russia has also denied the allegations.

Trump has also labeled Mueller’s investigation as a “witch hunt,” and has suggested that Russians might have meddled in favor of Hillary Clinton.