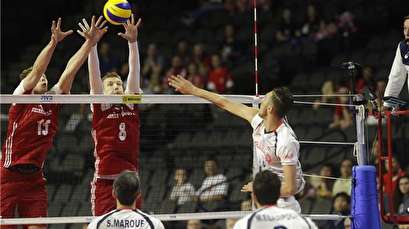 All three sets were fiendishly tight. The Iranian sportsmen were fighting resolutely in the first to assert their dominance in the game as Poles were 17-16.

Yet as the scores stood at 22-22, both sides started to show strong emotions and produced frenzied attacks.

The thrilling clash threatened to boil over as Poland’s coach Vital Heynen started to lose his rag with the officials. Iran finally claimed the set by 26 points to 24.

The second set saw more of the same despite some brilliant defense from Polish volleyball players.

At a crunch moment with the scores at 24-24, the Poles were initially gifted a point, when Iranian volleyball setter Saeed Marouf hit long.

Iranians, however, demanded a video check and the referee confirmed there had been the slightest touch off Poland’s Jakub Kochanowski.

Polish players and their coach were furious, and were all cautioned. Iranian finally sealed the second set 26-24.

Iranian volleyball players maintained their momentum in the final set, and went on amassing points to win it 25-22.

The 2018 FIVB Volleyball Men's Nations League kicked off on May 25, and will run through July 8 in 22 host cities.

A total of 16 teams compete in a round-robin format with every core team hosting a pool at least once.

The teams are divided into four pools of four teams at each week and compete five weeks long, with a total of 120 matches.

The relegation takes in consideration only the 4 challenger teams.

The last-ranked challenger team plays the promotion play-off against the Challenger Cup winners. The winners of the play-off will qualify for the next edition as a challenger team.