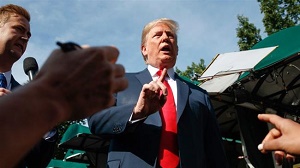 TEHRAN, Young Journalists Club (YJC) -“I hate the children being taken away. The Democrats have to change their law. That's their law,” Trump said Friday while speaking to a group of reporters outside the White House.

However, no law US mandates separating children from their parents who illegally enter the country. Reporters repeatedly noted to Trump that his statement about the policy was untrue.

“[Attorney General Jeff Sessions is] following laws, very simply, that were given to us and forced upon us by the Democrats,” Trump said.

“But there’s no law that says families have to be separated at the border,” a reporter responded.

“The Democrats gave us the laws. I want the laws to be beautiful,” Trump repeated.

The Trump administration's current policy of separating families was announced April 6 and went into effect in May. Previously, people who entered the country illegally and had no criminal record were detained or referred for deportation, and mothers and children usually remained together.

Democrats have condemned the new process, calling it inhumane and cruel. “This is not a zero-tolerance policy — this is a zero-humanity policy,” said Senator Jeff Merkley, who recently visited detention centers in Texas to see where immigrant children were being held.

A US border patrol official told Reuters children are sometimes separated from the adults they are traveling with if officials suspect the relationship is fraudulent.

Once children are separated, they are treated as unaccompanied minors under the care of the Department of Health and Human Services, which houses them in government facilities, puts them in temporary foster care, or releases them to adult sponsors in the United States.

The moves by the government to separate families have been widely decried by the United Nations, medical professionals and a wide swath of US religious leaders.