Syria strongly condemns presence of US, Turkish forces around Manbij

TEHRAN, June 19 - Syria strongly denounced the presence of Turkish and US troops around the Arab country’s northern town of Manbij, a day after soldiers of both countries entered the outskirts of the flashpoint town as part of a deal reached between Ankara and Washington to purportedly remove US-backed Kurdish militants from the area and “secure” the region. 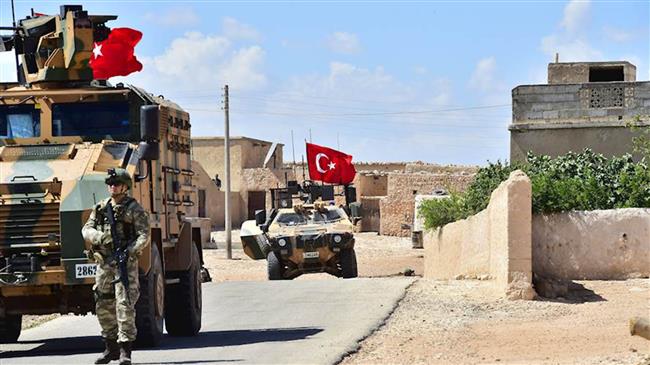 TEHRAN, Young Journalists Club (YJC) - “Syria expresses its strong condemnation and absolute rejection of the incursion of Turkish and American forces in the vicinity of Manbij, which comes in the context of continued Turkish and American aggression,” Syria’s official news agency, SANA, said, quoting an unnamed official from the country’s Foreign Ministry.

The official added that following successive achievements against various terror groups, the Syrian people and their valiant armed forces “are more resolute and determined than ever to liberate the entire Syrian soil from any foreign elements and to preserve the sovereignty and territorial integrity” of the Arab country.

The statement came just a day after Turkish broadcaster NTV, citing Turkey’s Prime Minister Binali Yildirim, reported that Turkish troops had begun patrolling areas around Manbij, as part of a deal reached between Ankara and Washington earlier this month to “ensure the security and stability” of the Syrian town.

Other reports said that American troops also began separate and independent patrols along the line separating Turkish-held areas of northern Syria from Manbij, which is currently under the control of the so-called Syrian Democratic Forces (SDF), a Kurdish-dominated and anti-Damascus militant group that has the support of Washington.

The Syrian government has given a degree of authority to the Kurdish regions to run their own affairs in the face of a foreign-backed militancy. The US, however, has used the vacuum to establish a foothold in those regions with the help of militants.

Ankara, for its part, considers the SDF as largely composed of militants from the People's Protection Units (YPG), viewed by the Turkish government as a terror group and the Syrian branch of the outlawed Kurdistan Workers’ Party (PKK). The latter has been fighting for an autonomous region inside Turkey since 1984.

The US angered Turkey by announcing a plan for the formation of a Kurdish militant force in Syria near the Turkish border, prompting Ankara in January to launch a cross-border military operation inside Syria, code-named Operation Olive Branch, with the declared aim of eliminating the YPG militants from northern Syria, particularly the Afrin region. Turkish troops captured Afrin in March, claiming that they had killed scores of YPG militants until then.

Earlier this year, Turkish President Recep Tayyip Erdogan had threatened to push its Afrin offensive against the YPG militants eastward to Manbij, where US forces are stationed, risking confrontation between the NATO allies.

However, Washington agreed to withdraw the US-backed Kurdish militia from Manbij, arguably paving the way for Turkish troops to capture the volatile town, according to the recent US-Turkey deal.

Ankara had repeatedly accused Washington of failing to fulfill its promise regarding the withdrawal of its allied militants from Manbij after the purge of the Daesh terrorist group in August 2016.

Operation Olive Branch in Afrin region is Turkey's second major military intervention in Syria during the unprecedented foreign-backed militancy that broke out in 2011.

Ankara claimed that its military campaign was aimed at pushing Daesh from Turkey's border with Syria and stopping the advance of Kurdish forces, who were themselves fighting Daesh.