TEHRAN, June 22 - US President Donald Trump has threatened to place a 20 percent tariff on all European cars entering the country, once again escalating tension with Brussels over trade issues. 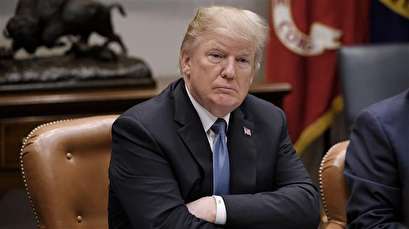 TEHRAN, Young Journalists Club (YJC) -Trump’s threat on Friday came a day after Brussels imposed retaliatory tariffs on iconic US goods worth 3.2 billion dollars, including jeans, motorcycles and whiskey, in response to the US’s duties earlier imposed on steel and aluminum.

“Based on the Tariffs and Trade Barriers long placed on the US and it[s] great companies and workers by the European Union, if these Tariffs and Barriers are not soon broken down and removed, we will be placing a 20% Tariff on all of their cars coming into the US. Build them here!” Trump said in a tweet.

The US currently charges a 2.5 percent duty on cars imported from Europe and levies a 25 percent tariff on imported pickup trucks.

Jean-Claude Juncker, president of the European Commission, said in a speech in Dublin on Thursday that Trump’s tariffs contradict “all logic and history.”

Trump’s announcement made auto stocks index in Europe fall 1 percent, according to Thomson Reuters data. Meanwhile, shares in BMW were down 2 percent, Volkswagen shares declined 1.1 percent, and Daimler shares were off by 1.4 percent.

Trade disagreements between Washington and Brussels have intensified since March 8 when the US imposed a 25 percent tariff on imported steel and a 10 percent tariff on aluminum imports from the EU, Canada, Mexico and China.

Trump argued at the time that enormous flows of imports to the US were putting in jeopardy the American national security, making an odd departure from a decades-long US-led move towards open and free trade.

Mexico and Canada were among Washington's other allies that announced their own measures in response to the Trump tariffs, which came into effect on June 1. China, the main target of the metal tariffs, also adopted its own countermeasures.

Some EU countries like France and the Netherlands have sought a tough line against Washington while others like Germany have urged a different approach and one that could resist Trump’s "America First" policies.

The move by the Trump administration could also complicate ongoing negotiations between the US, Canada and Mexico on changing the North American Free Trade Agreement (NAFTA).