TEHRAN, June 23 - Two years on from Britain’s historic vote to leave the European Union, and tens of thousands of people have taken to the streets in London to call for a new vote on the fate of their country. 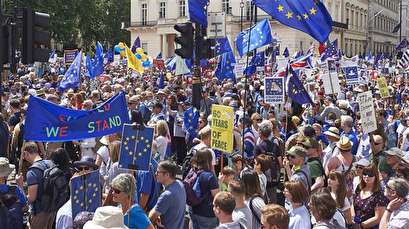 TEHRAN, Young Journalists Club (YJC) -Marking the second anniversary of the Brexit vote, an estimated 50,000 protesters, including politicians and lawmakers, joined the People’s Vote march to the Parliament Square in London on Saturday, in the hope of stopping Brexit.

The organizer, People’ Vote campaign, says it wants to ensure a public ballot "so that we can decide if a decision that will affect our lives for generations makes the country better or worse off.”

One of the rally organizers James McGrory said Brexit is "not a done deal" and people must "make their voices heard.”

He said that “Brexit is such a big deal [that] it should include all 65 million of us in the country, and that's why people today are marching for a people's vote.”

Thousands of people also rallied in support of the Brexit in London, calling on the government to hold a final public vote on the terms of the deal.

A recent poll showed earlier this week that 48 percent of respondents supported a referendum on the final deal, while 25 percent were opposed.

Neither of Britain's two main political parties, Conservative or the Labour Party, however, support the idea of holding a referendum on the final deal.