TEHRAN, June 25 - The US-led coalition purportedly fighting the Daesh Takfiri terrorist group has airlifted two high-ranking commanders of the foreign-sponsored terror network from a region in Syria’s eastern province of Dayr al-Zawr, where Iraqi pro-government fighters are tightening the noose around the extremists, to a safe sanctuary. 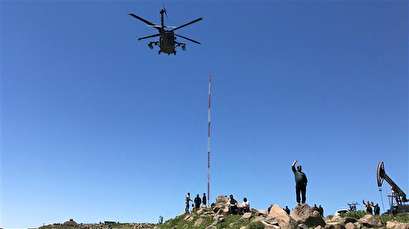 TEHRAN, Young Journalists Club (YJC) - Local source, requesting anonymity, told Syria’s official news agency SANA that two US-led military helicopters conducted the operation in the Twaimin area, and transported the pair to a US base in al-Shaddadi town of the northeastern province of Hasakah.

On September 10, 2017, Syrian Foreign Minister Walid al-Muallem said the US-led coalition was trying to destroy the Arab country and prolong the armed conflict there.

Muallem stated that Damascus would demand the dissolution of the military contingent, stressing that thousands of Syrian women and children had been killed by coalition airstrikes in the troubled northern province of Raqqah and Dayr al-Zawr province.

The top Syrian diplomat further noted that the Pentagon was using the coalition to cover up its destruction campaign in Syria.

He added that the US-backed militiamen from the so-called Syrian Democratic Forces (SDF) are fighting Syrian army forces to gain control over the oil-rich areas of the country.

Damascus would not allow any external force to violate its sovereignty, Muallem pointed out.

Last August, the so-called Syrian Observatory for Human Rights reported that US-led choppers had transported four Daesh members and a civilian from a house used as an arms depot in Beqres, a suburban area east of Dayr al-Zawr, to a safe area.

According to the report, the five people included a European bomb expert, three Egyptian Daesh members and a local resident of Beqres.

Russia has been helping Syrian forces in an ongoing battle in the province of Dayr al-Zawr as the Daesh terrorist group struggles to keep its last positions in eastern Syria.

The Russian military assistance, which began in September 2015 at the official request of the Syrian government, has proved effective as the Syrians continue to recapture key areas from Daesh and other terrorist groups across the country with the backing of Russian air cover.

On May 21, the General Command of the Syrian Army and Armed Forces announced in a statement that complete security was restored to Damascus and its countryside after al-Hajar al-Aswad district and al-Yarmouk camp had been totally purged of Daesh terrorists.

The development was preceded by flushing the Takfiris out of the towns of Yalda, Babbila and Beit Sahem on the southern outskirts of Damascus.