TEHRAN, June 25 - Portugal have qualified from Group B in second place after a dramatic late penalty from Karim Ansarifard canceled out a brilliant opener from Ricardo Quaresma in a tempestuous encounter in Saransk. 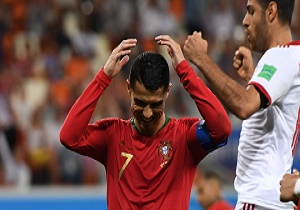 TEHRAN, Young Journalists Club (YJC) - Portugal captain Cristiano Ronaldo will be left to rue his missed penalty that would have seen his team qualify from Group B in first place, as Spain could only manage a last-gasp draw against already-eliminated Morocco, although in similarly dramatic fashion.

Iran attacked from the off in Mordovia Arena, knowing a victory would see them advance at the expense of one of the heavyweights of international football. Portugal met fire with fire and the first half was punctuated with attacks from both sides as neither seemed keen to concede any ground.

After Ronaldo had single-handedly hauled Portugal to a draw versus Spain and a win over Morocco by scoring all four of his nation’s World Cup goals, it was the turn of someone else to shine for the Iberian nation.

That someone else was Ricardo Quaresma. Almost a forgotten man in the Portugal ranks, Quaresma’s career could be filed under ‘what could have been’ as the former teenage prodigy had flopped at Barcelona, Inter Milan and Chelsea.

But on 45 minutes, Quaresma upstaged his fellow Sporting Lisbon academy graduate when he played a delicious one-two with Adrien Silva before showing achingly precise vision to curl the ball with the outside of his right foot over Iran goalkeeper Alireza Beiranvand.

VAR was consulted again when Ronaldo appeared to have elbowed Pouraliganji during an off-the-ball tussle, although Cáceres brandished only a yellow card. Buoyed by the penalty save and perhaps feeling somewhat bitter, Ronaldo was not dismissed, ‘Team Melli’ pushed for an equalizer and became increasingly frantic as time ebbed away.

Their persistence paid off when they were awarded a penalty on 91 minutes, again the decision made by the VAR system. Iran appealed for a penalty after a Sardar Azmoun header brushed the hand of Cedric Soares.

Cáceres astonishingly awarded the penalty, and, as if immune to the pressure the importance of the penalty held, Ansarifard stepped up to fire the ball into the top right hand corner, leaving Iran needing just one more goal to advance.

However, their heroics were essentially in vain as the game stayed at 1-1. A late equalizer for Spain in their game against Morocco in Kaliningrad meant that Portugal finished runners-up in the group.

The results means that Portugal will now travel to Sochi to play Uruguay on June 30, while Spain settle for a Moscow date with hosts Russia at Luzhniki Stadium on July 1.