TEHRAN, June 26 -North Korea will cancel its annual “anti-US imperialism” rally, part of a growing detente with its longstanding enemy as the two countries negotiate over the fate of the North’s nuclear weapons program 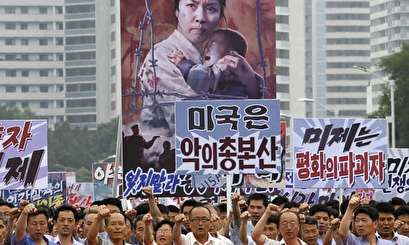 TEHRAN, Young Journalists Club (YJC) -North Korea will cancel its annual “anti-US imperialism” rally, part of a growing detente with its longstanding enemy as the two countries negotiate over the fate of the North’s nuclear weapons program

The rally, which typically marks the start of a month of events commemorating the 1950-53 Korean war and denouncing the US, has been held for years and last year attracted 100,000 people in the capital, Pyongyang. North Korean officials did not give a reason for skipping the rally, according to the Associated Press, which first reported the cancellation.

The event usually features slogans and propaganda cartoons attacking the US, participants raising their fists in defiance and even commemorative postage stamps showing the destruction of the US. Last year one official said all members of the ruling Workers’ party and residents of Pyongyang were “aflame with the will to completely remove the US imperialists, the sworn enemy, from the globe”.

In the past the rally has allowed North Korea to communicate its political message to the world, which has centred on grievances over US policy in the region.

Mintaro Oba, a former US diplomat who focused on North Korea policy, said the cancellation was significant: “It tells us that North Korea has enough confidence in the staying power of engagement with the United States – for now – that they want to create a more positive atmosphere at home and send more constructive signals abroad.

“Its ultimate goal remains to either make progress with the United States on its terms, or ensure Washington bears most of the blame if tensions rise again.”

The decision comes after the North Korean leader, Kim Jong-un, met Donald Trump in Singapore this month in a historic summit. In the wake of their meeting the US pledged to suspend military drills with ally South Korea, exercises that have infuriated the North for years.

But while both work to achieve the vague language of Kim’s promise to “completely denuclearise the Korean peninsula”, America’s top US diplomat refused to put a timeline on negotiations with North Korea contradicting a senior defence official who said Washington would soon present a timeline to North Korea with “specific asks”.

Mike Pompeo, the US secretary of state, said he wanted to see continued progress towards North Korean denuclearisation and that the administration would regularly assess Pyongyang’s seriousness about abandoning its nuclear program.

“I am not going to put a timeline on it, whether that’s two months, six months, we are committed to moving forward in an expeditious moment to see if we can achieve what both leaders set out to do,” Pompeo told CNN, referring to the 12 June summit between Trump and Kim.

Pompeo, who has been charged with leading negotiations aimed at persuading North Korea to give up a nuclear weapons program that threatens the US, said he would “constantly reassess” whether enough progress was being made to continue talks. “We hope that we will have an ongoing process of making progress,” CNN quoted him as saying.

The day after the Singapore summit Pompeo said Washington hoped to achieve “major disarmament” by North Korea within Trump’s current term, which ends on 20 January 2021.

Trump said last week the “No 1 statement” in the document he and Kim signed in Singapore was “we will immediately begin total denuclearisation of North Korea”, although there was no such statement in the text.

In the joint statement, Kim “reaffirmed his firm and unwavering commitment to complete denuclearisation of the Korean peninsula”, but made no reference to a timeline, and going into the summit, Pyongyang repeatedly rejected unilateral nuclear disarmament.

Referring to Trump’s decision to suspend joint military exercises with South Korea, Pompeo told CNN this move would last “only so long as there is a good faith negotiation progress, productive results being achieved”.

Pompeo said a week ago he was likely to travel back to North Korea “before too terribly long” to try to flesh out commitments made at the summit. The state department has since said it has no travel plans to announce.

CNN said Pompeo suggested it was too soon to expect a detailed roadmap after 40 years of tensions but insisted that Kim had been “unequivocal” about his willingness to denuclearise.