TEHRAN, June 26 - Thai authorities said on Tuesday they were making every effort to find a missing teenage soccer team trapped in a cave complex, as concern for their safety mounted on the third day of the search. 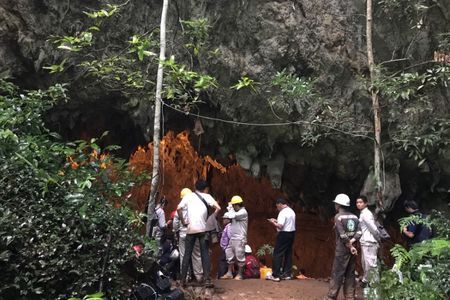 TEHRAN, Young Journalists Club (YJC) - The 12 boys, aged 11 to 16, and their 25-year-old coach, were trapped on Saturday after heavy rain flooded the cave complex in a forest park in the northern province of Chiang Rai.

“We must find the children today. We have hope that they are alive somewhere in there,” provincial governor Narongsak Osottanakorn told Reuters, adding that searchers were trying their hardest to find them.

Worried relatives gathered at the cave entrance, many having camped overnight hoping for news.

“Come home,” cried one distraught mother. “Mummy is here to pick you up.”

Among those waiting were three team mates who skipped Saturday’s expedition to the cave after soccer practice, because their parents told them to come home, media said.

“I can’t concentrate at school knowing they are in there, so I came here,” said Sonpong Kantawong, 14, who missed the trip because his mother drove to pick him up after soccer practice, media said.

The boys’ bicycles and soccer boots were found at the mouth of the caves after they went missing. A 17-member navy unit including divers and underwater drones has joined the search.

Rescuers have covered about 6 km (4 miles) of the 10-km (6-mile)-long cave network, said Damrong Hanpakdeeniyom, the head of the park, adding that visitors are usually only allowed to venture in about 700 meters (2,300 ft).

“Inside it is very dark ... and if it rains between July and December then we close it,” Damrong added. “This group went in further than allowed.”