TEHRAN, June 27 -Thai soldiers, volunteers and members of a navy “seal” unit including a team of divers worked through the night to try to find a group of young soccer players trapped inside a cave, as the search for the team entered a fourth day on Wednesday. 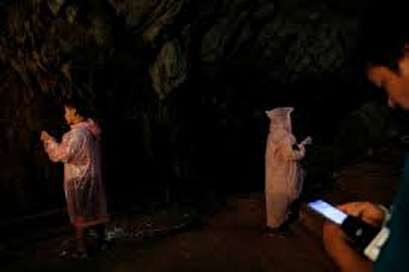 TEHRAN, Young Journalists Club (YJC) -Thai soldiers, volunteers and members of a navy “seal” unit including a team of divers worked through the night to try to find a group of young soccer players trapped inside a cave, as the search for the team entered a fourth day on Wednesday.

“Last night we worked non-stop in order to drain water out of the cave as much as possible,” Major Buncha Duriyapan, commander of the 37th Military District in Chiang Rai, told Reuters.

The boys, aged between 11 and 16, and their 25-year-old assistant coach, went missing on Saturday after soccer practice.

Messages exchanged between the team members showed they planned to explore the cave and had taken flashlights and some food.

Prime Minister Prayuth Chan-ocha told reporters on Wednesday that foreign divers would join the search effort, adding that he hoped for good news.

“We will have three foreign divers join the search effort,” Prayuth said. “I hope to have good news soon.”

Sergeant Kresada Wanaphum from the Royal Thai Army said high water levels inside the cave is the biggest challenge, along with low oxygen levels.

“Water is the biggest challenge. There is a lot of debris and sand that gets stuck while pumping,” Kresada told Reuters.

“We have to switch out units because there is not enough air in there,” he added, before entering the cave.

A guide to the caves of northern Thailand describes the Tham Luang cave as having an “impressive entrance chamber” leading to a marked path. It then describes the end of the path and the start of a series of chambers and boulders.

“This section of the cave has not been thoroughly explored. After a couple of hundred meters the cave reduces in size to a mud floored passage 2 m wide and 3 m high,” writes Martin Ellis, author of ‘The Caves of Thailand Volume 2’.

Vern Unsworth, a British cave explorer based in Chiang Rai who has joined the search operation, said water was coming inside the cave from two directions.

“There is a watershed inside, which is unusual, it means there is water coming in from two directions,” Unsworth told Reuters. “The biggest challenge is the water. Massive amounts.”Nopparat Kantawong, the team’s head coach who did not attend soccer practice on Saturday, said he believes the boys are still alive.

“I believe up until this very moment that my team members and my assistant coach still have some light left. They will not abandon each other,” Nopparat told reporters.