TEHRAN, June 27 - Swedish Ambassador to Iran Helena Sangeland said Stockholm is engaged with Tehran in a wide range of issues. 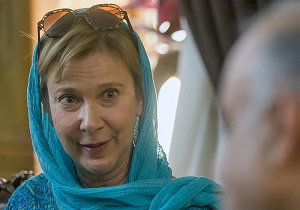 TEHRAN, Young Journalists Club (YJC) - Sangeland made the remarks in the International Workshop on Gender Mainstreaming co-hosted by the Iranian and Swedish sides in Tehran.

Expressing satisfaction for co-hosting a workshop on gender mainstreaming, the diplomat said the event is the best venue to discuss the issue and learn from each other.

She also praised Iranian football team for its outstanding performance during the 2018 World Cup.

She expressed the strong willingness of the Swedish part to expand all-out ties with Iran in wide range of issues including economy and investment.

'We are committed together to promote women's participation in the labor market, decision-making, etc. We think women should play a bigger role in the government and society at large,' the Swedish envoy added.

She voiced the Swedish side's interests to share its experiences with Iran in the gender mainstreaming.

The day-long International Workshop on Gender Mainstreaming held in Tehran on Monday was attended by several Iranian and Swedish officials, including Iran's President Assistant for Citizens' Rights Affairs Shahindokht Molaverdi and Vice-President for Women and Family Affairs Massoumeh Ebtekar.