TEHRAN, June 28 - Italian Prime Minister Giuseppe Conte has warned that he will block a joint statement from European Union members on refugees if it fails to address Rome’s concerns on the issue. 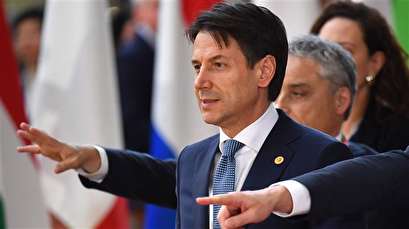 TEHRAN, Young Journalists Club (YJC) - Conte said Thursday that if fellow EU members failed to do more to help Italy cope with an influx of refugees at its southern shores, he would refuse to endorse the conclusions of the Thursday-Friday meeting in Brussels.

“It's a possibility I hope not to consider, but if we reach that point, on my behalf we will not have shared conclusions,” said Conte on Thursday, adding, “Italy does not need more words, but concrete actions.”

For the past several years, Italy has been on the frontline of dealing with refugees escaping war and poverty in Africa. A new populist government in Rome has taken a tough line on the refugee issue despite the fact that the number of arrivals has significantly subsided since Rome and the EU reached an agreement with Libyan militia and government to curb the flow last year. Italy has recently revived tensions by refusing to let several refugee rescue boats dock at Italian ports.

Italy’s threat to veto a joint EU declaration on refugees comes against intensified efforts by embattled German Chancellor Angela Merkel to find a common solution to the issue, a move that could save her political future in Germany.

Allies in Merkel’s conservative bloc have given her until the end of this month to come up with an EU-wide mechanism that could block further refugee arrivals into Germany.

Merkel said Thursday that the refugee issue was the most serious of challenges currently facing the EU.

"Europe has many challenges but migration could end up determining Europe's destiny," she told German lawmakers hours ahead of the summit, adding that the EU could decide to “overcome the challenge in a way that people in Africa or elsewhere believe that we are guided by our values.”