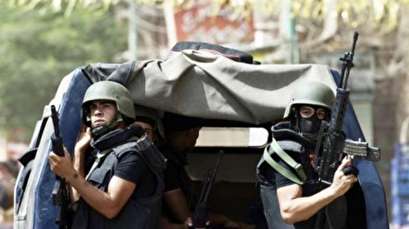 TEHRAN, Young Journalists Club (YJC) - Ten members of the Hasam outfit have been killed and two others arrested, Egypt’s interior ministry said on Thursday, without specifying when the raids and arrests took place.

In one police raid, six militants were killed and a weapons cache was unearthed in Beheira province northwest of Cairo, the ministry said.

It said a suspect was arrested in a residential apartment in Alexandria where arms and explosives were also seized.

A shootout in Assiut province south of Cairo left four other suspects dead, the ministry said. A Hasam member who had allegedly acquired the car used in a March 24 car bombing in the Alexandria in northern Egypt was also arrested.

The suspected militants were allegedly all involved in the bombing on the eve of elections targeting a security chief for Alexandria that killed two policemen.

Police accuse Hasam of being an armed wing of the Muslim Brotherhood, which was banned after the army ousted Egypt's democratically-elected president Mohamed Morsi in 2013 following mass protests against his one-year rule.

Morsi was backed by the Muslim Brotherhood which denies any involvement with militant groups.

More than seven years ago, an uprising led to the ouster of long-time dictator Hosni Mubarak from power. Since then, Egypt is suffering from a tattered economy and militants affiliated with  Daesh.

Early this month, Abdel Fattah el-Sisi was sworn in as the Egyptian president for a second four-year term in office, vowing to deal with the economic and security challenges posing a threat to the North African country.