Investors hopeful Mexico's Lopez Obrador will veer to the center

TEHRAN, June 30 -Mexican assets are poised to strengthen even if leftist front-runner Andres Manuel Lopez Obrador wins Sunday’s presidential election, analysts say, on expectations he will govern from the center and as the uncertainty stemming from the race fades. 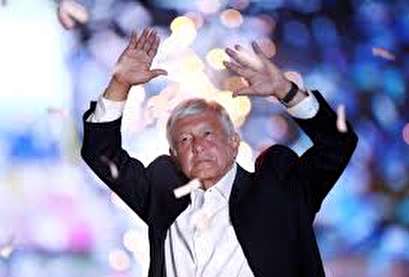 TEHRAN, Young Journalists Club (YJC) -Mexican assets are poised to strengthen even if leftist front-runner Andres Manuel Lopez Obrador wins Sunday’s presidential election, analysts say, on expectations he will govern from the center and as the uncertainty stemming from the race fades.

Lopez Obrador, a former Mexico City mayor, holds a roughly 20-point lead over his nearest rival ahead of the July 1 vote, according to the latest polls, putting him on track to become the first leftist Mexican president since the 1930s.

Strategists at Miami-based Bulltick Capital, however, are among those who believe that Lopez Obrador will pursue centrist policies once in office.

When the peso went above 20 to the U.S. dollar “we went long Mexican assets, both equities and fixed income, and we retain these bullish positions, which we believe will perform favorably as the investment community draws similar conclusions regarding AMLO in the wake of his victory,” Bulltick said in a note to clients, citing the acronym used to refer to Lopez Obrador.

The peso MXN=D2 had lost as much as 16 percent versus the U.S. dollar over the last 12 months, partly due to investor concerns about a Lopez Obrador presidency as well as rising trade tensions between Washington and Mexico City.

The currency is up roughly 6 percent from the 2018 low of 20.88 to the dollar it hit earlier this month.

Mexico remains among the emerging economies that are least vulnerable to currency pressures due to its low reliance on offshore capital inflows, credit ratings agency Moody’s said in a report this week.

Fitch Ratings said the main corporate credit risks in Mexico involved currency weakness and uncertainty about domestic policy, but the credit ratings agency added that there were buffers in place.

“Broad geographic diversification of operations and strong capital structures are expected to mitigate the credit risk of most rated issuers, resulting in only modest rating changes during the next 12 months,” Alberto Moreno, senior director at Fitch, said in a statement.

Mexican debt has traded in a relatively tight range to U.S. benchmarks. Mexican bonds on the benchmark JPMorgan Emerging Markets Benchmark Index Plus (EMBI+) .JPMEPMEX were at 209 basis points over corresponding U.S. Treasuries on Friday, not far from the average of 189 basis points over the last year.

Early last month that yearly average was at its tightest since 2015.

Mexico's benchmark IPC stock index is on track to post its largest monthly increase .MXX in over three years but is still down near 4 percent for the year, as is the U.S.-traded MSCI Mexico ETF (EWW.P).

Lopez Obrador’s early and sustained lead in the polls is hardly the only reason why Mexican assets have felt pressure.