TEHRAN, June 30 -Turkey’s military says it has conducted airstrikes against the positions of the outlawed Kurdistan Workers' Party (PKK) militant group in northern Iraq, killing at least four members of the “terrorist” outfit. 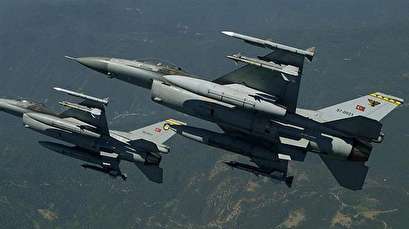 TEHRAN, Young Journalists Club (YJC) -General Staff of the Republic of Turkey announced the news in a statement carried by the country’s official Anadolu news agency on Saturday, saying the airstrikes were carried out in the Avasin-Basyan region of northern Iraq.

In recent months, Ankara has stepped up air raids against suspected PKK positions in northern Iraq, particularly its stronghold in the Qandil Mountains. The Turkish government has already said it might launch a ground offensive into the rugged area, where top PKK members are believed to be stationed.

On June 8, Turkish Prime Minister Binali Yildirim said that his country’s troops had been “deployed in a 300-kilometer area, in 30 kilometers deep in northern Iraq” in a declared goal of eliminating the PKK militants. His comments came just a day after Turkish President Recep Tayyip Erdogan said Ankara might strike the Iraqi city of Qandil “at any moment one evening.”

Turkey has carried out frequent air raids against the PKK targets in northern Iraq. It previously conducted cross-border operations in the region in the 1990s and 2000s. A shaky ceasefire between Ankara and the PKK that had stood since 2013 was declared null and void by the militants in 2015 in the wake of a large-scale Turkish campaign against the group.

In late 2015, tensions escalated between Baghdad and Ankara when Turkey deployed 150 heavily armed soldiers, supported by 20 to 25 tanks, to the Bashiqa military base in Iraq’s northern province of Nineveh, claiming that the deployment was aimed at purported training of Iraqi Kurdish Peshmerga fighters battling the Daesh Takfiri terrorist group.

In late March this year, Ankara also said that it had commenced operations against Kurdish forces in Iraq's Sinjar region, despite Iraq's announcement that no foreign forces had crossed the border into the country. A few days later, Iraq also started deploying forces in Sinjar.

The Turkish government has previously said that it would attack northern Iraq if the central government in Baghdad and the United Nations did not take steps to eliminate the PKK militants. It also claims that the Makhmur camp, which is located 100 kilometers south of the Kurdistan Regional Government (KRG)’s capital Erbil and was purportedly overrun by the PKK militants, must be shut down due to security threats.

The Iraqi government, however, has time and again strongly denounced any violation of its sovereignty and territorial integrity, including those committed by Ankara, saying any foreign anti-terror operation inside the Arab country must be conducted based on Baghdad's permission.

Turkey has been opening military fronts against Kurdish groups in Syria as well. It carried out the so-called Operation Euphrates Shield against purported targets of Daesh between August 2016 and March 2017, and launched the ongoing Olive Branch offensive against the purported positions of the US-backed People's Protection Units (YPG) Kurdish militia in Syria’s western enclave of Afrin earlier this year.

Ankara considers the YPG as a terror group and the Syrian branch of the PKK. Both offensives were conducted in flagrant defiance of the Syrian government.