TEHRAN, July 01 -German Chancellor Angela Merkel and her CDU party will discuss plans to reduce immigration Sunday as conservative rebels also meet, in key talks likely to determine the fate of her government. 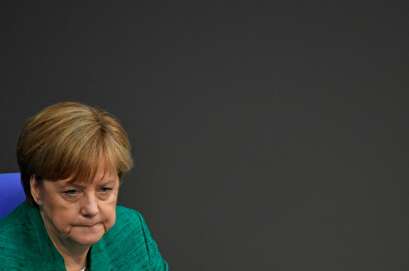 Merkel's government has been pushed to the brink over the migration issue after allowing more than one million asylum-seekers into Germany since 2015.

The policy has provoked a backlash from Merkel's conservative CSU coalition partner with her Interior Minister Horst Seehofer, also the CSU chief, even threatening to unilaterally turn back migrants at the border.

On Friday, the European Union's 28 members hammered out a hard-fought deal to tackle migration and avert a crisis that has threatened the very fabric of the bloc.

Afterwards, Merkel announced that she had also reached separate agreements with Spain and Greece on taking back asylum-seekers.

According to a document sent to the CSU and fellow coalition partner the Social Democratic Party, Merkel has also secured similar deals with a total of 14 countries including France and central European states that were fiercely critical of her migrant policies, such as the Czech Republic, Hungary and Poland.

Two of the countries mentioned -- Hungary and the Czech Republic -- however denied Saturday that any such deal had been reached.

Merkel is also proposing that migrants arriving in Germany who first registered in another EU country should be placed in special holding centres under restrictive conditions, the document says.

The agreements struck by Merkel could placate the hardline rebels in her government.

Seehofer, meanwhile, must decide whether to make good on a threat to turn away at the border migrants already registered in other European Union nations.

The move would force Merkel to fire him, likely leading to a CSU walkout costing the chancellor her majority in parliament.

Sunday's meetings will see the CDU leadership meet in Berlin while the CSU leadership and parliamentary group will meet in Munich.

They follow EU leaders agreeing to consider setting up "disembarkation platforms" outside the EU, most likely in North Africa, in a bid to discourage migrants and refugees boarding EU-bound smuggler boats.

Member countries could also create processing centres to determine whether the new arrivals are returned home as economic migrants or admitted as refugees in willing states.

Combined, the deals reached by the EU and Merkel, were "more than equivalent in their effect" to Seehofer's demands, she told reporters Friday.

The CSU's Bavarian state premier Markus Soeder said "of course what has been achieved in Brussels is more than we originally thought" at a political meeting Saturday.

Interior Minister Seehofer has yet to respond in public to the Brussels summit.

Within Germany asylum-seekers already registered in another country would be kept in "admissions centres" under highly restrictive conditions, according to the eight-page document.

"There will be a residency obligation reinforced with sanctions," the paper states.

Elsewhere, the document recalls that asylum applications in Germany between January and May this year were 20 percent lower than the same period in 2017.

The chancellor's frantic last-minute diplomacy was ultimately prompted by the CSU's fear of losing its cherished absolute majority in Bavaria's state parliament.

The "Free State" with its beer-and-lederhosen Alpine traditions, powerful industries and impenetrable dialect has a more conservative bent than Germany's other regions.