TEHRAN, July 02 -A British warplane directly attacked Syrian forces near the border with Iraq and Jordan last month, killing an army officer and injuring seven others, the Sunday Times daily has reported. 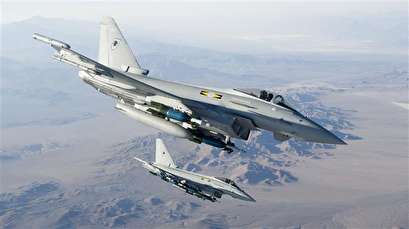 A Typhoon fighter jet dropped a 500-pound (226-kilo) bomb on Syrian forces who were fighting Takfiri terrorists near the al-Tanf base where British and US special forces train militants, it said.

The bombing is the first since the British military took part in a series of airstrikes in Syria in April following an alleged chemical attack which the US and its allies blamed on Damascus.

According to the Times, the UK dropped the bomb last month because they thought Syrian troops were trying to approach the al-Tanf base where anti-government Maghawir al-Thowra militants are trained and commanded.

The US has set up the heavily-fortified base in the al-Tanf desert where the Syrian, Iraqi and Jordanian borders meet.

The US and its allies have marked a 34-mile (54-kilometer) zone in the area and warned Syrian forces against approaching it inside their own territory.

According to a Russian military expert at the country's foreign ministry, the Pentagon is training dozens of Takfiri terrorists at 19 military camps inside Syria.

Last month, Iraq's popular Hashd al-Sha'abi fighters came under an airstrike near the area, with the group saying fragments from missiles showed it was a US attack.

As the fighters vowed revenge, Washington said it suspected Israel was behind the air raid but both the Syrian government and Iraqi officials said US aircraft had carried out the strike.

The paramilitary group has said it lost 22 fighters following the night raid on June 17 on the Syrian village of al-Hari in Dayr al-Zawr province.

Hashd fighters operate in the area at the request of the Syrian government to counter Daesh terrorists and keep them away from Iraqi borders.

The United States has in the past attacked government forces and their allies inside Syria on several occasions.

In April, the US, France, and Britain launched coordinated attacks on Syrian targets, using more than 100 cruise missiles.

Syrian leaders have said the US and its allies are trying to destroy the Arab country and prolong the armed conflict there.

Last month, Syria's state news agency SANA said the US had airlifted two high-ranking commanders of the Daesh terrorist group in the Twaimin area to an American base in al-Shaddadi in the Hasakah province.

The so-called Syrian Observatory for Human Rights, which is generally sympathetic to militants, has made similar claims in the past and reported on US airlifts of Daesh members.

The US and its allies have been bombing what they call Daesh positions inside Syria since September 2014 without any authorization from the Damascus government or a UN mandate.

Damascus says the US and its Western and regional allies are aiding Takfiri terrorist groups, while Israel carries out sporadic strikes against Syrian government forces.