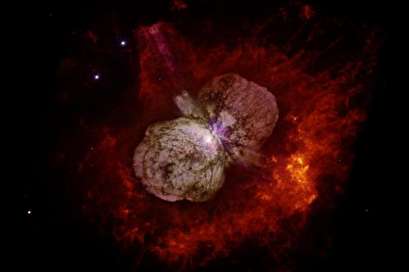 Scientists have surmised that Eta Carinae, the brightest, most massive stellar system within 10,000 light-years of Earth, is capable of accelerating cosmic particles to speeds approaching the speed of light. Scientists also know that high-energy cosmic rays regularly collide with Earth's magnetosphere. But because the paths of cosmic rays are scrambled by magnetic fields, tracing their origins is quite difficult.

Eta Carinae is a binary star system. The stars feature masses of 90 and 30 times the mass of the sun. Every 5.5 years, their eccentric orbits see the duo pass within 140 million miles of each other.

"Both of Eta Carinae's stars drive powerful outflows called stellar winds," Michael Corcoran, an astrophysicist at NASA's Goddard Space Flight Center, said in a news release. "Where these winds clash changes during the orbital cycle, which produces a periodic signal in low-energy X-rays we've been tracking for more than two decades."

NASA's Fermi Gamma-ray Space Telescope has also observed a unique gamma ray signature emanating from the direction of Eta Carinae. However, the observations weren't precise enough to confirm a link between the high-energy rays and the massive star system.