TEHRAN, July 04 - At least 11,432 Rohingya Muslims have fled violence and persecution in Myanmar and crossed into Bangladesh so far in 2018, UN High Commissioner for Human Rights Zeid Ra'ad al-Hussein says. 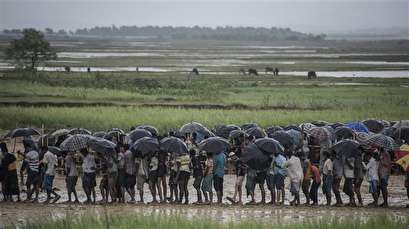 TEHRAN, Young Journalists Club (YJC) - Zeid said in a speech to the UN Human Rights Council on Wednesday that Rohingya Muslims continue to flee Myanmar's Rakhine state with many testifying about violence, persecution, killings and burning of their homes.

The UN human rights chief said that many Rohingya refugees also reported being pressured by Myanmar authorities to accept a national verification card that says they "need to apply for citizenship".

"No amount of rhetoric can whitewash these facts. People are still fleeing persecution in Rakhine, and are even willing to risk dying at sea to escape," Zeid added.

Rohingya Muslims based in Rakhine have been subjected to a campaign of killings, rape and arson attacks by the military backed by the country’s majority Buddhist extremists in what the UN has described as “a textbook example of ethnic cleansing.”

The brutal campaign has forced some 700,000 Rohingya to flee their homeland since August 2017 and seek refuge in Bangladesh.

Many of the displaced Rohingya are either living in squalid camps or just across the border in a plot of land known as "no man’s land."

The Rohingya, who have lived in Myanmar for generations, are denied citizenship and are branded illegal immigrants from Bangladesh, which likewise denies them citizenship.

Bangladesh and Myanmar agreed in November last year to begin repatriating the Rohingya but the process has stalled. The vast majority refuse to contemplate returning until their rights, citizenship and safety are assured.

On July 1, the International Committee of the Red Cross (ICRC) said it is not yet safe for thousands of Rohingya Muslims living in overcrowded refugee camps in Bangladesh to begin returning to their homeland of Rakhine.

Share to
Related News
The Rohingya lists: refugees compile their own record of those killed in Myanmar
In US trade war, China will 'absolutely not' fire first shot
Rouhani: US exit from Iran nuclear deal will benefit no one
Iran says Trump’s oil bans to backfire on US
Tags
un ، muslim ، people
Your Comment